Angry Orchard And Concacaf Announce Partnership For The 2021 Gold Cup

NEW YORK, March 30, 2021 /PRNewswire/ — Angry Orchard, the nation’s leading hard cider maker 1, and the Confederation of North, Central American and Caribbean Association Football (Concacaf) announced today a year-long partnership, naming Angry Orchard the official hard cider of the 2021 Concacaf Gold Cup. The Gold Cup is the region’s flagship men’s national team competition in which the best national teams from North and Central America and the Caribbean compete to be crowned regional champion. The tournament engages millions of fans across the region and will provide a great platform for Angry Orchard to join the fervor and fandom. 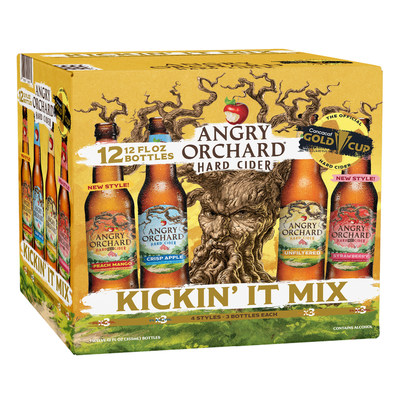 Angry Orchard will celebrate the road to this summer’s Gold Cup through media integrations, customized in-store and on-premise programming, experiential activations at games and a sweepstakes offering drinkers a chance to win a trip to the Gold Cup Final.

To bring sweet soccer excitement to stores through the summer, Angry Orchard is also rolling out a golden, limited-edition Gold Cup Variety Pack – the Kickin’ It Mix. Featuring fan favorites Crisp Apple and Unfiltered as well as new Peach Mango and Strawberry Hard Fruit Ciders, this pack is a perfect combination for watch parties or post-rec league games.

“We are very much looking forward to this summer’s Gold Cup after a very challenging year for the world,” said Concacaf Chief Commercial Officer, Heidi Pellerano. “Angry Orchard is a great new partner for Concacaf and will support us in engaging fans across the region and increasing the brand awareness of our flagship competition,” added Pellerano.

The Angry Orchard-Concacaf partnership will forge a deeper connection with soccer’s engaged millennial and multicultural fan base by creating unique experiences and offerings that bring people together.

“As the official hard cider of this year’s Concacaf Gold Cup, we’re eager to tap into the spirited fanfare of soccer to bring Angry Orchard to new stadiums,” said Kelli McCusker, Head of Marketing for Angry Orchard. “Our drinkers are already passionate soccer fans, so a partnership with the Gold Cup allows us to connect with current and new drinkers to reinforce cider’s role as a delicious and refreshing choice for cheering on their national teams during the tournament.”

Taking place every two years, the Concacaf Gold Cup is the official national team championship of the region, drawing large crowds and millions of television viewers. A celebration of soccer, sportsmanship, and culture, the 2021 Concacaf Gold Cup will air nationally on the Univision and FOX family of networks and broadcast by television partners to fans in countries around the world.

The 16th edition of the competition, which features 16 national teams, will be held in major metropolitan cities across the United States from July 10 to August 1, 2021. Concacaf will announce the schedule and tournament-wide venues, as well as other details for the 2021 Gold Cup and Gold Cup Prelims in the coming months.

Soccer United Marketing supported Concacaf in the delivery of this important commercial partnership for this summer’s Gold Cup.

To learn more about Angry Orchard, visit AngryOrchard.com. For the latest ticket information for all Gold Cup matches, visit www.goldcup.org

About Concacaf:
The Confederation of North, Central America and Caribbean Association Football (Concacaf) is the governing body for football in North America, Central America and the Caribbean, and one of the six continental confederations that comprise FIFA. Concacaf is composed of 41 Member Associations, including nations and territories from Canada in the north, south through Central America and across the Caribbean to Guyana, Suriname and French Guiana on the South American continent. Concacaf provides manages a network of unified competitions and development activities to unite this diverse region in football, with the goals of actively promoting universal access to our sport, and raising the quality of football across the Confederation.

About Angry Orchard:
The leading cider across the country, Angry Orchard’s cider makers experiment with apple varieties near and far to continuously develop new cider styles and flavors. Crafted with real apples and the highest quality ingredients, Angry Orchard is balanced, refreshing and full of flavor, with a wide variety of styles fit for all. At the home of Angry Orchard on a 60-acre apple orchard in New York’s Hudson Valley, the team of cider makers create small-batch experimentation with fruit grown right on-site while offering an experience for guests to sip cider amongst the trees. To learn more about Angry Orchard, visit AngryOrchard.com.