MIAMI, Oct. 28, 2021 /PRNewswire/ — Tickets will officially be on sale Friday morning for the Xtreme Fighting Championships’ (OTC:DKMR) highly anticipated return to The DeltaPlex Arena in Grand Rapids, MI for YoungGuns 4 on Dec. 10 at Etix.com. 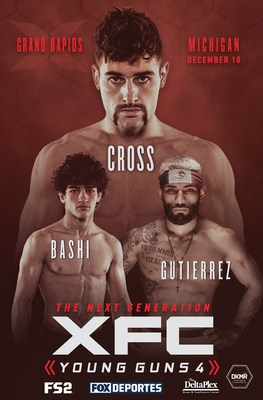 In the Main Event, Kenny “The Boss” Cross makes his highly anticipated return to the Hexagon against challenger Jose “Lil’ Juggernaut” Martinez in the XFC’s stacked lightweight division.

Widely regarded as one of the most exciting young fighters in the game today, the dynamic Dearborn, MI product Cross boasts a 12-3 record on the strength of six straight wins. This is the former Lights Out Championship king’s first fight in over a year, as he was injured during training after his successful XFC Lightweight Tournament Quarterfinal.

Martinez, meanwhile, is 12-5 since making his professional debut in 2015. The hard-hitting Tonkawa, OK product has won four of his past five bouts and has eight wins by stoppage on his impressive resume.

In the Co-Main Event, undefeated super prospect Austin Bashi tries to climb to 5-0 against his toughest opponent yet, Texan submission specialist Reshal Malik, in the XFC’s loaded bantamweight division.

Bashi, fighting out of West Bloomfield Township, MI, has established himself as one of MMA’s brightest prospects following four straight impressive victories in the XFC’s Hexagon before his 20th birthday.

Fighting out of the famed Metro Fight Club in Houston, Malik is 3-3-1 in his career, with all of the fast-rising 23-year-old’s victories coming by submission.

XFC Vice President of Fight Operations Matt Frendo: “Adding a Co-Main Event with the likes of Austin Bashi and Reshal Malik only further validates how great this event is going to be. The fan support we received at the last Michigan event was amazing, and I know it will be even better on Dec. 10.”

XFC Majority Owner, Chairman & CEO Steve Smith: “XFC 45 at The DeltaPlex Arena in Grand Rapids, MI was one of the most epic nights in XFC history. Our return to the venue in December is raising the bar and expectations in every aspect.”

Xtreme Fighting Championships, Inc. is the first publicly traded premier international mixed martial arts (“MMA”) organization, headquartered within the Chase tower in downtown Miami, trading under the ticker symbol DKMR. Xtreme Fighting Championships (“XFC”) is currently ranked #1 in MMA broadcast distribution reaching more than 780 Million Households worldwide. XFC’s owned & operated OTT channel “XFCTV Fightworld” averages 220,000 viewers daily, in addition XFC partners with 36 broadcasters worldwide, including HBOMAX globally and the FOX family of networks in the United States. XFC has previously been carried on some of the largest open television broadcasters in Latin America – Rede TV! as well as ESPN, NBC Sports Network, Telemundo Universo, Esportes Interativo, Terra TV (the largest internet portal in the world), and UOL – the largest internet portal in Latin America, and premium cable & satellite television networks. The XFC currently has more than 83 exclusively signed fighters, representing over 35+ countries worldwide with even more growth expected. Boasting the signing of The Next Generation of Male & Female Superstars, the XFC is known for entertaining fans with the most action packed MMA events both on television and in stadium venues. The Next Generation of MMA.