FORT WASHAKIE, Wyo., Aug. 4, 2021 /PRNewswire/ — The Veterans of the American Legion Richard Pogue Post #81 hope you will join us Thursday, August 12th for the dedication of the first memorial in Wyoming honoring Native American-Indigenous Veterans and their military service. Several state and local leaders will be in attendance to commemorate this momentous occasion. Governor Mark Gordon, Shoshone and Arapaho Tribal Leaders, and Wind River Veterans will provide remarks.

The first memorial in Wyoming honoring Native American-Indigenous Veterans and their military service.

Gulf War Veteran, and Chief Washakie descendant Kristen Washakie shared, “It was an honor to serve the United States of America. It is the most respected position in Shoshone culture and at the forefront of many tribal activities and ceremonies.”

The Path of Honor – Wind River Veterans Memorial ceremony will be held at the Frank B. Wise Business Center at 10:30 a.m. on Thursday, August 12th.

Located in Fort Washakie on the Wind River Reservation, The Path of Honor is a tribute to all military service members who live within the boundaries of the Wind River Reservation in Wyoming. The memorial is a collection of stones representing four-eras of service; Pre World War Era Service and World Wars I and II, the Korean War, the Vietnam War, and finally the Post- Vietnam & Gulf War Era.

“The Path of Honor project at its core seeks to unify, include, and inspire. Encouraging us all to come together to learn about, preserve, and honor the incredible courage, commitment, and sacrifice of all veterans who have lived on the Wind River Reservation,” shared Commander Wyman H. Weed, Sr of Richard Pogue Post #81.

Army Veteran James Large, who will speak during the event, described the centuries of Native American military service. “The standard with the Native Americans I served with in the army was that we all had family that served in the military, going back to World War I and II. I had 14 uncles that served in the military. It was a place of honor, a place you wanted to be.” 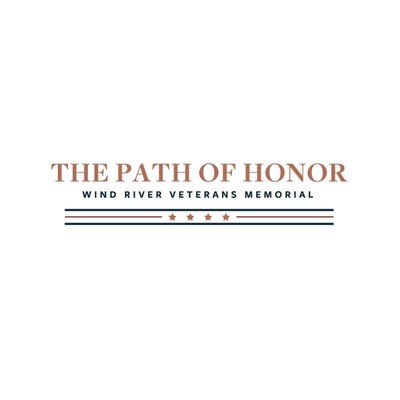