SAN DIEGO, Nov. 5, 2021 /PRNewswire/ — Baja Jerky Racing Team goes for gold this year as their champion off-road driver Larry Roeseler attempts to solo the Score International Baja 1000 race and secure his record breaking 15th win. At age 64, Roeseler is the oldest competitor to attempt soloing the course. Baja Jerky Racing Team is part of the passion for all things Baja that inspires the Baja Jerky brand, known for their better-for-you beef jerky. 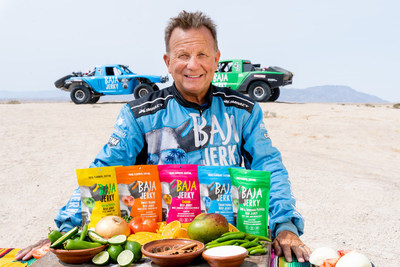 “I’m thrilled to be taking part in the 54th Baja 1000,” said Larry Roeseler. “I finished my first Baja race in 1972 and it is such an honor to continue pursuing my passion after all these years. On behalf of the Baja Jerky Racing Team, I want to thank all our fans for the support. Baja, Mexico holds a special place in my heart and is the inspiration behind Baja Jerky and the racing team. This race can be grueling and attempting to solo is no easy task, but with the assistance of my co-driver and navigator Eric Brandt, I‘m up for the challenge!”

Since entering the off-road racing community in September 2020, Baja Jerky Racing Team has found quick success at the hands of driver Larry Roeseler, who won first place at the Baja 500 in June and had a solid finish of 8th at the Baja 400 and has helped earn the team first place in the points standing heading into the Baja 1000. Roeseler, aka “Mr. Baja,” will be the oldest driver to ever solo the Baja 1000 and if the team finishes in the top five, Baja Jerky Racing Team wins the championship. Known for being one of the world’s toughest off-road races, this epic race is the longest non-stop point-to-point race in the world. Beginning November 18, Roeseler will take the Baja Jerky trophy truck through this year’s course which begins in Ensenada and stretches the length of the Baja California peninsula, finishing in La Paz.

The unpredictable race consists of over 1200 miles of desert, dotted with booby traps, hidden jumps, mud pits, steep mountain passes, and other extreme terrain. The Baja 1000 can take over 24 hours to complete and soloing the course is a massive feat. The extreme terrain and length of the race typically requires two to three drivers on a team who swap driving throughout.

Launched in 2019, Baja Jerky passionately creates Baja-inspired products that support a spirit of adventure and transport you to a carefree place. The company’s mission is to connect others with the essence of Baja Jerky through delicious, quality food inspired by adventures and the vibrance of Mexican culture. Baja Jerky’s current product offerings include six flavors of 100% natural beef jerky, two different seasonings and dried mangos. The company’s products can be found on the Baja Vida website, Amazon and select retailers nationwide. For more information visit www.bajajerky.com.