Afghans from all around the U.S. travel to Washington D.C. to protest for a Decentralized system & Ethnic Representation & pledge support to H.E. Ahmad Massoud 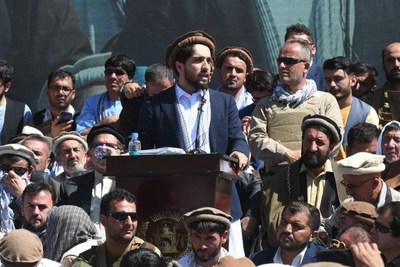 This morning’s protest was organized by Afghan-American communities across the United States. Afghan Americans from  San Diego, San Francisco, Virginia, and Colorado,  made their way to Washington D.C. amid potential health risk to protest for the rights of all ethnic groups and guarantee a just and lasting peace in Afghanistan that is acceptable to all.

Jawid Paymani, a protestor who made the trek from Los Angeles on a 40 hour drive, stated taking the health risk for the long protest is a small sacrifice compared to defending the important achievements of the past 2 decades such as women’s rights, democracy, and the continued preservation of freedom of speech.

The protestors filled the Washington sky with banners, one of which read   “A decentralized political system will allow social justice, democracy, and national unity to prevail in Afghanistan!”

The Afghan activists are worried mistakes of the 2001 Bonn Conference would repeat, excluding any of the key ethnic groups will be a roadblock to achieving peace, in a nation that already requires healing. The landscape has eerily resembled that of the early 90’s. The Afghan peace talks should include all ethnic groups and guarantee a just and lasting peace that is acceptable to all parties within the country. Both the unitary presidential system which is more centralized than any modern Monarchy and the Taliban’s proposed emirate system are unjust and unacceptable for Afghans. A just system is one in which all ethnic groups have: equal representation, autonomy for cultural and religious freedoms, and most important of all, the guarantee of all ethnic group’s human rights. Only with the Decentralization of power from the existing tyrannical centralized system and an equitable distribution of wealth and resources can Afghanistan enter a new age of peace

The Afghans had among the banners with the calls for decentralization, images of Ahmad Shah Massoud who defeated the red army in the 1980s and for years single handedly defended the world against The Taliban & International Terrorism.

The protestor’s chants roared through the Capital grounds, in favor of Ahmad Massoud, the son of Ahmad’s Shah Massoud. He entered politics earlier this year, and has since become  a new source of hope to Afghans across the world from the United States, to France, India, and Russia.  Ahmad Massoud is currently reviving his father’s movement and is demanding that only through decentralization of power and the equal distribution of wealth can peace and social justice be established in Afghanistan.

Wahab, an activist leader among the crowd, shared the vision that had inspired them to protest. A vision that Ahmad Massoud had published last year in the New York Times about Decentralization in Afghanistan, entitled “What is Missing From Afghan Peace Talks”.

The link for H.E. Ahmad Massoud’s vision for peace published in the New York Times, can be read on the link below: https://www.nytimes.com/2020/04/14/opinion/afghanistan-peace-talks.html