TORONTO, April 27, 2022 /CNW/ – Today in Ontario, 735,000 households cannot access a home they can afford that does not need major repairs or is not overcrowded. In anticipation of Ontario’s election, the Co-operative Housing Federation of Canada (CHF Canada) and the Ontario Non-Profit Housing Association (ONPHA) are teaming up to form the Vote4Housing Campaign. Their campaign website (vote4housing.ca) launched today with tools for voters to send messages to their local candidates and party leaders, urging them to do everything possible to build, protect, and support deeply affordable housing across Ontario. 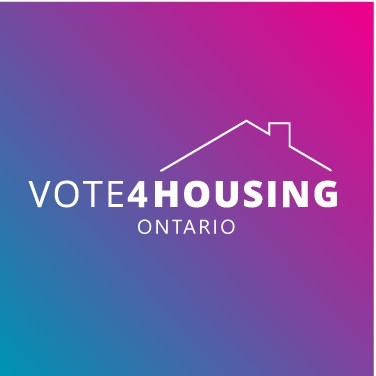 “Our province is facing a crisis in housing affordability. Supply is lagging, rent is going up, and existing affordable housing needs to be protected,” said Marlene Coffey, CEO of ONPHA. “Incomes are not keeping pace with the cost of living, and we know that this issue is touching more people than ever before from a wide variety of social and economic backgrounds. It’s particularly having an impact on vulnerable communities like single-parent households, seniors, Indigenous people and newcomers to Canada.”

“Without immediate action from the provincial government, Ontarians in need of housing assistance face the very real prospect of becoming homeless. And we need voters to deliver that message,” she added.

Over 200,000 Ontario households need immediate access to housing, with some waiting up to 12 years for a place to live. Making the problem worse, over the past ten years, approximately 12,000 households needing support lost funding from provincial housing programs. The Vote4Housing Action Plan seeks to address these gaps in the system by proposing the provincial government:

“With the provincial election about to launch, voters have a lot of power to influence government decision-making. Each person that adds their voice to the campaign is telling our political leaders that having a home matters, that being able to afford a home matters, and that the people who need housing assistance matter,” said Tim Ross, Executive Director of CHF Canada. “Housing will be a top issue this election. This campaign has the power to transform lives, but we need support and action from every corner of the province to make that happen,” said Ross.

Vote4Housing is a non-partisan campaign launched for the 2022 provincial election. We want to engage and mobilize Ontarians to rally public and political support for ending homelessness and housing need in Ontario.

Founded in 1988, ONPHA is an independent association funded and directed by its members, representing approximately 700 of Ontario’s non-profit housing providers. Our members house more than 400,000 people in 163,000 homes across 220 Ontario communities. Many of our members provide specialized housing and support services for Ontarians who need help to enjoy a successful tenancy.

About the Co-operative Housing Federation of Canada (CHF Canada)

CHF Canada is the national voice of co-operative housing, representing 2,200 housing co-operatives, home to a quarter of a million people in every province and territory. Co-operative housing is a well-documented success story. For over 50 years, co-ops have provided good-quality, affordable housing owned and managed by the community members who live there.