LiveXLive To Launch Pop-Culture Competition Franchise Self Made KO

LOS ANGELES, June 25, 2021 /PRNewswire/ — LiveXLive Media (NASDAQ: LIVX) (“LiveXLive”), a global platform for live-stream and on-demand audio, video, and podcast/vodcast content in music, comedy, and pop culture, and owner of PodcastOne, Slacker Radio, React Presents and Custom Personalization Solutions, announced today it will launch Self Made KO, a global pop-culture competition franchise. The inaugural event will feature a boxing fight card headlined by women from social media, music, sports, technology, and fashion, with the winners vying for over $1 million+ in prizes –  from the fighter who sells the most pay-per-views to knockouts and more. TikTok star Isabella Avila and Influencer/Podcaster Jordyn Jones, who boast a combined 30 million followers, have already signed on to jump into the ring. Additionally, due to the huge response and audience appetite for these events, LiveXLive plans to launch a weekly show cataloging all the drama leading up to the big event. 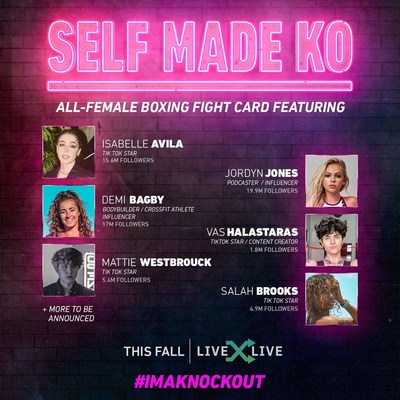 Joining Jordyn and Isabella on the card are bodybuilder/CrossFit athlete/influencer Demi Bagby, TikTok star/content creator Vas Halastaras, social media stars Mattie Westbrouck, Salah Brooks and Zay Tashon. While more talent is soon to be announced, LiveXLive has already received overwhelming requests to be a part of this event so it’s opening up for submissions, where anyone interested in participating can submit a video and tag on social @LiveXLive #ImAKnockout.

The success of the LiveXLive produced #SocialGloves pay-per-view livestream, which garnered over 3.5 billion impressions and was responsible for the fighters’ social media followers growing by over 12 million, has spawned a global passion for pop-culture battles. LiveXLive will tap into this cultural phenomenon and plans to develop, produce and distribute multiple franchises from music, sports, and other popular genres. Fans can expect to see a cavalcade of pop-culture competitions ranging from boxing, racing, sports, music, and lots more. Each event will bring the best aspects of entertainment together – sports, social media influence, music, lifestyle, and technology, plus NFTs, merch, and VIP meet and greet experiences.

LiveXLive’s CEO and Chairman Robert Ellin stated, “The global response to our social boxing event has been tremendous. We’ve seen overwhelming interest from sponsors and from the biggest female influencers to participate in this new wave of entertainment. Social Competitions have captured the zeitgeist of the influencer generation. LiveXLive is one of the few companies that has excelled in physical and virtual productions, in free and paid, in music and sports and we see it all coming together in new ways and are thrilled to be at the forefront of this space.”

The musical lineup for Self Made KO along with the show hosts will be announced shortly.

About LiveXLive Media, Inc.
Headquartered in Los Angeles, California, LiveXLive Media, Inc. (NASDAQ: LIVX) (the “Company”) (pronounced Live “by” Live) is a leading global all-in-one streaming artist-first platform delivering premium music and entertainment content and live-streams from the world’s top artists, expertly curated streaming radio stations, podcasts, and original video and audio-on-demand content, as well as personalized merchandise, connecting artists to millions of fans every day. The Company has streamed over 1,800 artists since January 2020 and has created a valuable connection between bands, fans, and brands by building long-term franchises in audio, video, podcasting, pay-per-view (PPV), live-streaming, and specialty merchandise. LiveXLive is available on iOS, Android, Roku, Apple TV, and Amazon Fire, and through OTT, Samsung TV, STIRR, Sling, and XUMO, in addition to its own app, online website, and social channels. The Company’s wholly-owned subsidiary PodcastOne, generates more than 2.25 billion downloads per year with 400+ episodes distributed per week across a stable of hundreds of top podcasts. The Company’s other major wholly-owned subsidiaries are LiveXLive, Slacker Radio, React Presents, and Custom Personalization Solutions. For more information, visit www.livexlive.com and follow us on Facebook, Instagram, TikTok, and Twitter at @livexlive.

Forward-Looking Statements
All statements other than statements of historical facts contained in this press release are “forward-looking statements,” which may often, but not always, be identified by the use of such words as “may,” “might,” “will,” “will likely result,” “would,” “should,” “estimate,” “plan,” “project,” “forecast,” “intend,” “expect,” “anticipate,” “believe,” “seek,” “continue,” “target” or the negative of such terms or other similar expressions. These statements involve known and unknown risks, uncertainties and other factors, which may cause actual results, performance or achievements to differ materially from those expressed or implied by such statements, including: the Company’s reliance on one key customer for a substantial percentage of its revenue; the Company’s ability to consummate any proposed financing, acquisition or transaction, the timing of the closing of such proposed event, including the risks that a condition to closing would not be satisfied within the expected timeframe or at all, or that the closing of any proposed financing, acquisition or transaction will not occur or whether any such event will enhance shareholder value; the Company’s ability to continue as a going concern; the Company’s ability to attract, maintain and increase the number of its users and paid subscribers; the Company identifying, acquiring, securing and developing content; the Company’s intent to repurchase shares of its common stock from time to time under its announced stock repurchase program and the timing, price, and quantity of repurchases, if any, under the program; the Company’s ability to maintain compliance with certain financial and other covenants; the Company successfully implementing its growth strategy, including relating to its technology platforms and applications; management’s relationships with industry stakeholders; the effects of the global Covid-19 pandemic; changes in economic conditions; competition; risks and uncertainties applicable to the businesses of the Company’s subsidiaries; and other risks, uncertainties and factors including, but not limited to, those described in the Company’s Annual Report on Form 10-K for the fiscal year ended March 31, 2020, filed with the U.S. Securities and Exchange Commission (the “SEC”) on June 26, 2020, Quarterly Report on Form 10-Q for the quarter ended December 31, 2020, filed with the SEC on February 16, 2021, and in the Company’s other filings and submissions with the SEC. These forward-looking statements speak only as of the date hereof, and the Company disclaims any obligations to update these statements, except as may be required by law. The Company intends that all forward-looking statements be subject to the safe-harbor provisions of the Private Securities Litigation Reform Act of 1995.