BIRMINGHAM, Ala., Nov. 20, 2022 /PRNewswire/ — The title “Angler of the Year” signifies consistency, mental toughness, versatility and a little luck, making it one of the most difficult — and most coveted — honors in fishing. Drew Gregory, Brandon Palaniuk and Keith Poche find themselves in prestigious company as the 2023 Bassmaster Angler of the Year on each of their respective tournament trails. 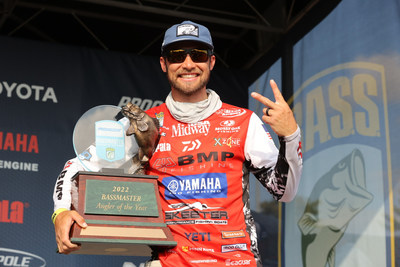 “There is a legacy that gets tied into this.”

Every venue on the 2022 Yamaha Rightwaters Bassmaster Kayak Series powered by TourneyX slate was a lake that Gregory had either never fished before or had only fished once prior to this season, but with meticulous study and preparation, the Kent, Ohio, native found waters that suited his strengths. Gregory’s remarkable run to win the inaugural Old Town Bassmaster Kayak Series Angler of the Year title included three wins and a Top 10 finish.

“I grew up with Bassmaster, and when they announced they were going to have an AOY, it is one of the things I put highest on my priority list this year. It is very humbling and overwhelming,” Gregory said. “I am old enough now to know that the ones who have been pioneering the sport for the last 15 years; and now in the high-end tournament scene, we are the Bill Dances, Jimmy Houstons, Roland Martins and Rick Clunns of (kayak fishing). There is a legacy that gets tied into this.

“I am just proud to help take this sport to a cool level and help share it with the mainstream population so they can fall in love with bass fishing out of these plastic boats too. It has done a lot of good for my life, my family and my health just being in touch with God and nature. I want to give back the best I can through this AOY and be the best representative for Bassmaster I can.”

While Gregory is charting new territory on the Bassmaster Kayak Series, the 2023 Elite Series season saw the legendary status of “The Prodigy” continue to grow.

Palaniuk doesn’t think of himself as a legend. In his mind, he is still the 8-year-old from Rathdrum, Idaho, who discovered a dream of reaching the biggest stage in bass fishing. But by winning the 2022 Progressive Insurance Bassmaster Angler of the Year race, Palaniuk became just the 12th angler to win multiple AOY trophies, with his first title coming back in 2017.

“The Prodigy” is surely living up to his nickname, adding a second AOY win to a list of already-impressive career highlights that includes 2010 B.A.S.S. Nation champion and six-time B.A.S.S. winner.

“It is amazing. It hasn’t sunk in all the way yet,” Palaniuk said of his second AOY title. “The feeling of winning and that accomplishment, that moment and feeling when (emcee Dave) Mercer announces it on stage, that is what makes all the hard work, the early mornings, the late nights and the hard times OK. It makes it worth it. For me, it is another piece of the puzzle of this crazy life we live, and I’m glad the pieces fell the way I wanted them to.

Poche of Pike Road, Ala., has had a ton of fun fishing his style in 2022, and it has paid off in a big way in the St. Croix Bassmaster Opens presented by Mossy Oak Fishing. In addition to requalifying for the Bassmaster Elite Series and winning the second Central Open at Red River to secure a berth in the 2023 Academy Sports + Outdoors Bassmaster Classic, Poche locked up the Bassmaster Opens Angler of the Year title in the overall standings with a 15th-place finish in the last tournament of the season.

“It has been fun. I am fishing like I want to fish and doing it my style in my little boat, off-the-grid style,” Poche said. “No matter who you are, whether you fish or do something else in life, if you are having fun and are happy, you will be successful at it. It took me 41 years to figure that out, but heck I’m doing it now and having fun.”

Poche’s attention will turn towards the 2023 Elite Series where he has a couple of events circled on the schedule, particularly the Bassmaster Elite at Lay Lake which is an hour from his home.

About B.A.S.S.
B.A.S.S., which encompasses the Bassmaster tournament leagues, events and media platforms, is the worldwide authority on bass fishing and keeper of the culture of the sport, providing cutting edge content on bass fishing whenever, wherever and however bass fishing fans want to use it. Headquartered in Birmingham, Ala., the 515,000-member organization’s fully integrated media platforms include the industry’s leading magazines (Bassmaster and B.A.S.S. Times), website (Bassmaster.com), TV show, radio show, social media programs and events. For more than 50 years, B.A.S.S. has been dedicated to access, conservation and youth fishing.