The Montreal Firefighters Association confirms that it has filed a report with the CNESST following an event that could have had tragic consequences during a rescue operation in the waters of the St. Lawrence River

MONTREAL, Nov. 11, 2022 /CNW Telbec/ – It is in the wake of a rescue operation in the waters of the St. Lawrence, near the Mercier Bridge, during the night of October 24 to 25, 2022, that the Montreal Firefighters Association has reported to the CNESST a dramatic situation that a crew of 4 of its members, aboard their boat, were confronted with: a perilous situation that could have ended disastrously, in conditions strangely similar to those that tragically cost the life of firefighter Pierre Lacroix last year and injured three of his fellow crew members. 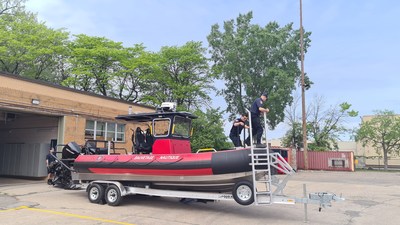 The firefighters involved in this unfortunate incident were looking for a potential victim who had jumped from the top of a bridge, the Mercier Bridge, but there was no confirmation of this fact at the time. The boat then found itself in an area that the crew was not familiar with and which is non-navigable and unmarked for the public.

The report includes, among other things, a denunciation of training practices, the absence of duly qualified resource persons to supervise the personnel assigned to develop and provide training, but also to administer the entire salvation boating file, the absence of a precise pedagogical plan, and the failure to comply with NFPA standards and the Occupational Health and Safety Act (OHSA).

The union’s vice-president, Richard Lafortune, also pointed out that the Association also denounced the lack of procedures for returning boats to service following storage, maintenance and repair. In addition, there are two other interventions involving the prohibited zone established by the CNESST.

“For the association, the only solution is the complete and integral suspension of the water rescue service from boats on the water until the training, equipment, number of responders and boats as well as the capacity of the service to manage and intervene in such missions are adequate in order to avoid losing rescuers again,” continued Mr. Lafortune.

Mr. Lafortune concluded by saying that the union was actively pursuing its interventions and representations to the competent authorities, in the name of the physical integrity of its members. In view of the ongoing investigations, particularly that of coroner Gehane Kamel who is looking into the tragic death of firefighter Lacroix, the Association, out of a duty of reserve, will not grant any interviews following the publication of this press release.