SEOUL, South Korea, Dec. 7, 2022 /PRNewswire/ — SK hynix Inc. (or “the company”, www.skhynix.com) announced today that it has developed working samples of DDR5* Multiplexer Combined Ranks (MCR) Dual In-line Memory Module, the world’s fastest server DRAM product. The new product has been confirmed to operate at the data rate of minimum 8Gbps, and at least 80% faster than 4.8Gbps of the existing DDR5 products.

* Double Data Rate (DDR), a DRAM standard mainly used for servers and client applications, has been developed up to the fifth generation. The MCR DIMM is a module product with multiple DRAM chips attached to the board and improved speed as a result of two ranks operating simultaneously.

* Rank: A collection of basic transfer units of the data sent to CPU from DRAM module. A rank typically refers to 64 bytes of data to be transferred to central processing unit as a bundle.

SK hynix designed the product in a way that enables simultaneous operation of two ranks by utilizing the data buffer* installed onto the MCR DIMM based on Intel’s MCR technology.

* Buffer: A component that optimizes signal transmission performance between DRAM and CPU. Mainly installed onto modules for servers requiring high performance and reliability

By enabling simultaneous operation of two ranks, MCR DIMM allows transmission of 128 bytes of data to CPU at once, compared with 64 bytes fetched generally in conventional DRAM module. An increase in the amount of data sent to the CPU each time supports the data transfer rate of minimum 8Gbps, twice as fast as a single DRAM. 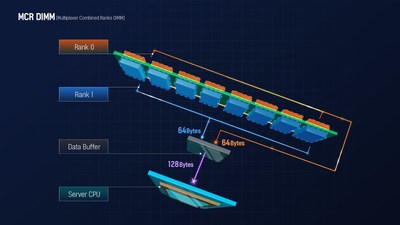 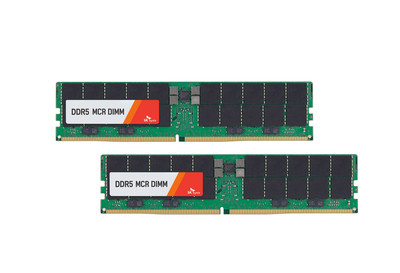 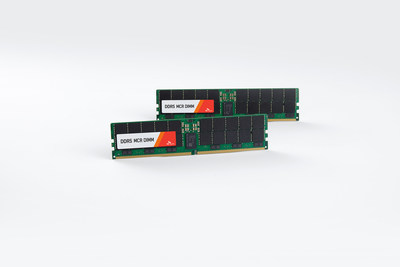 A close collaboration with business partners Intel and Renesas was key to success. The three companies worked together and cooperated throughout the process from the product design to verification.

SK hynix’s Head of DRAM Product Planning Sungsoo Ryu said that the achievement was possible thanks to convergence of different technologies. “SK hynix’s DRAM module-designing capabilities were met with Intel’s excellence in Xeon processor and Renesas’ buffer technology,” Ryu said. “For a stable performance of MCR DIMM, smooth interactions between the data buffer and processor in and out of the module are essential.”

“SK hynix delivered another technological evolution for DDR5 by developing the world’s fastest MCR DIMM,” Ryu said. “Our efforts to find technological breakthroughs will continue as we seek to solidify our leadership in the server DRAM market.”

Dr. Dimitrios Ziakas, Vice President of Memory and IO Technologies at Intel, said that Intel and SK hynix are leading the way on memory innovation and the development of high performance, scalable DDR5 for servers, along with other key industry partners.

“The technology brought forward comes from years of collaborative research between Intel and key industry partners to produce significant increases in deliverable bandwidth for Intel Xeon processors,” he said. “We look forward to bringing this technology to future Intel Xeon processors and supporting standardization and multigenerational development efforts across the industry.”

Vice President and General Manager of Memory Interface Division at Renesas Sameer Kuppahalli said that Renesas’ development of the data buffer is a culmination of three years of intensive effort spanning from concept to productization. “We’re proud to partner with SK hynix and Intel in the endeavor to realize this technology into a compelling product,” he said.

SK hynix expects the market for the MCR DIMM to expand driven by high performance computing that will take advantage of the increased memory bandwidth. SK hynix is planning to bring the product to mass production in the future.

*Intel, the Intel logo, and other Intel marks are trademarks of Intel Corporation or its subsidiaries.

Growth Opportunities and Innovative Use Cases for AI in Clinical Trials 2022: Remote Recruitment to Expand Patient Diversity for Cancer Trials

Blind Americans Come to Washington to Tell Their Stories to Congress

Growth Opportunities and Innovative Use Cases for AI in Clinical Trials 2022: Remote Recruitment to Expand Patient Diversity for Cancer Trials

Blind Americans Come to Washington to Tell Their Stories to Congress