GOLDSBORO, N.C., Nov. 4, 2022 /PRNewswire/ — Lt. Governor Mark Robinson, GOP Senate nominee Ted Budd and several other candidates were joined by hundreds of parents and activists in Goldsboro on Thursday for a “Rally to Save Our Schools” hosted by 1776 Action, an organization dedicated to “restoring honest, patriotic education.” 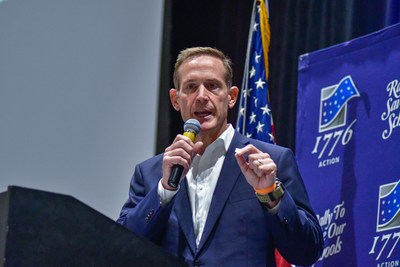 The debate over curriculum and “indoctrination” in the classroom has emerged as a major issue in North Carolina and beyond, and with the 2022 midterm elections just days away, Thursday night’s speakers pledged to defend the rights of parents in their children’s education and stop the promotion of political, racial and sexual propaganda in the classroom.

“Our schools should be focused on preparing our kids for successful lives,” remarked Robinson, “but too many are being abused by activists intent on waging an ideological crusade. It’s completely inappropriate and only vigilant parents can stop it. Finally, it’s starting to happen.”

Ted Budd, a Republican vying to help his party take control of the U.S. Senate, said “Parents – not the government – should control the direction of their children’s education. It is the responsibility of schools to prepare our kids to lead productive and successful lives after graduation, not force-feed them the latest woke left-wing propaganda. Critical Race Theory and similar false and destructive ideologies have no place in our classrooms.”

“It’s hard to believe just how corrupted and misguided much of the educational bureaucracy has become, and it’s time for serious leaders who will use their platform and the power of their office to stand up for parents and children,” said Kathy Barnette, former U.S. Senate candidate in Pennsylvania and 1776 Action Spokeswoman. “North Carolina will play a critical role in next week’s elections and 1776 Action wants to ensure that people understand the stakes and the positions of their respective candidates.”

Formed last year after President Biden’s cancelation of President Trump’s 1776 Commission, 1776 Action has advanced anti-CRT legislation in a variety of state capitols, assisted educators in speaking out against radical curriculum, and worked to shape the education debate with its 1776 Pledge, signed by over 500 candidates across America including Governors Kristi Noem (SD) Glenn Youngkin (VA).