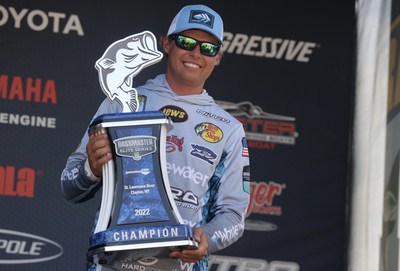 Could an angler win a Bassmaster Elite Series event with a four-day limit of 20 smallmouth bass that weighed 100 pounds or more?

It was asked by many throughout the week, and rookie Jay Przekurat of Stevens Point, Wis., gladly answered with a four-day total of 102 pounds, 9 ounces that won the Guaranteed Rate Bassmaster Elite at St. Lawrence River.

Prior to this event, no angler in recorded sportfishing history had ever reached 100 pounds solely with smallmouth. But with a rare stretch of calm, sunny weather and Wednesday’s super moon igniting the fish, Przekurat did just that.

His feat earned him a spot in the prestigious Bassmaster Century Club, which recognizes a four-day total of 100 pounds. It also earned him one of the most prestigious trophies in pro fishing and the $100,000 top prize.

“Trying to take in the moment during the day of the tournament is pretty hard because you’re just focused on catching 5-pounders out there,” Przekurat said. “You’re running back to the ramp and you start getting a little emotional. There’s no other feeling like it.”

Technically, second-place finisher Cory Johnston of Cavan, Canada, was the first to enter the Century Club with all smallmouth. Starting Championship Sunday in eighth place, Johnston took the stage before Przekurat and tallied 100-5.

“One of my goals was to beat the Johnston brothers (Cory and sixth-place Chris),” Przekurat joked. “They’ve been coming to my home waters of Sturgeon Bay and taking our money for years, so I had to come over here and take theirs this time.”

Przekurat started the event with his biggest catch — a 26-13 limit that put him 1-2 behind Day 1 leader and fellow rookie Jacob Foutz of Charleston, Tenn. Adding 25-8 on Day 2 sent Przekurat into Semifinal Saturday with a 1-13 lead over Cory Johnston.

Weighing 24-12 on Day 3 extended his advantage to a margin of 2-15 over Bob Downey of Detroit Lakes, Minn. Przekurat surged across the finish line with a final catch of 25-8 and edged Johnston by 2-4.

Przekurat caught his fish on a drop shot with a green pumpkin Strike King Half Shell. He used a No. 2 Gamakatsu G-Finesse drop-shot hook and a 1/4-ounce tungsten cylinder weight.

Przekurat spent all four days in Lake Ontario, south of Chaumont Bay. His starting spot was the north bank of Black River Bay — a postspawn staging area in 15 to 20 feet where smallmouth were gorging on abundant baitfish.

When fishing pressure and calm conditions took their toll on the bite, he would relocate to another postspawn spot, this one in 8 to 12 feet outside of Chaumont Bay. Windy and rainy weather limited practice efforts, but fortunately, Przekurat found enough potential to last four days.

“I settled on these areas because that’s all I had and I really didn’t feel like exploring during the tournament,” he said. “I know in smallmouth tournaments, you need to hunker down and focus on fishing because you need to be catching 5-pounders. Sometimes, it takes a while to catch those fish.”

In addition to making history in the Century Club, Przekurat also became the youngest Elite Series champion. At 23 years and 26 days old, he broke the record previously held by Casey Ashley, who won the 2007 Elite on Smith Mountain Lake at 23 years, four months and nine days old — also in his rookie season.

Johnston spent all of his time in Lake Ontario, mostly near the Wolfe Island area. Looking for postspawn fish roaming the shallows, he caught the majority of his bass on a drop shot with a green pumpkin SPRO CJ Smasher.

Spending most of his time on Lake Ontario, Blaylock caught most of his bass drop shotting a YUM Warning Shot. He also caught bass on a Ned rig with a 1/6-ounce head and a YUM Ned Dinger and a small swimbait.

“Day 2, when I had that big bag, I had two big ones that I caught in the river right in front of takeoff,” Blaylock said. “I caught some other good ones throughout the day, but those two fish were huge in that big bag that allowed me to be here on the final day.”

Cory Johnston also won the $2,000 VMC Monster Bag award with his catch of 28-8 on Championship Sunday.

Brandon Palaniuk of Rathdrum, Idaho, extended his lead in the Progressive Insurance Bassmaster Angler of the Year standings with 612 points. David Mullins of Mt. Carmel, Tenn., is in second with 571, followed by John Cox of DeBary, Fla., with 561, Brandon Lester of Fayetteville, Tenn., with 546 and Drew Benton of Blakey, Ga. with 527.

The Bassmaster Elite at St Lawrence River was hosted by Jefferson County in cooperation with the 1000 Islands Clayton Chamber of Commerce.