LOS ANGELES, Sept. 17, 2021 /PRNewswire/ — President J. Biden has nominated Sim Farar to serve as one of four United States representatives for the 76th Session General Assembly of the United Nations. Mr. Farar was originally appointed by former President William Jefferson Clinton to the 54th General Assembly. This is only the second time in history for someone to be appointed twice. 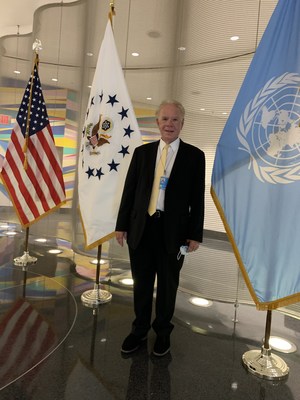 Mr. Farar is currently the Chairman of the United States Advisory Commission on Public Diplomacy (USACPD), appointed by former President Obama and approved by the United States Senate. USACPD reports to the President, Secretary of State, and the American Public.

“I am honored and privileged to be appointed by President Biden to serve our country as a representative to the United Nations General Assembly,” stated Mr. Farar. “During these unprecedented times, I understand the challenges the international community faces. I look forward to working with my fellow colleagues to help bring the world to a brighter future.”

Mr. Farar is the managing member of JDF Investments Company LLC, specializing in corporate development and financing merger transactions for over 35 years.

Mr. Farar has been a California resident since 1956. He has been married to Dr. Debra S. Farar for 48 years and resides in Pacific Palisades, California.