TYSONS, Va., July 5, 2022 /PRNewswire/ — PenFed Credit Union, the nation’s second-largest federal credit union, furthered its commitment to the military community with a $50,000 donation to America’s VetDogs to help veterans and first responders with disabilities. PenFed Credit Union President/CEO James Schenck presented the check to America’s VetDogs President/CEO John Miller during pre-game activities on the field of Nationals Park before the team squared off against the Miami Marlins during its Patriotic Series: Independence Day Game presented by PenFed. 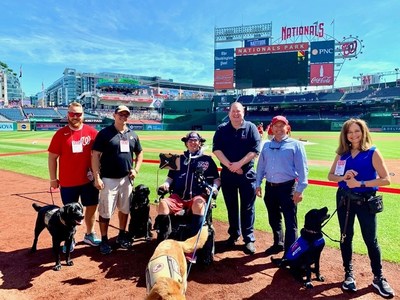 The donation will be used to redecorate and modernize a residential dorm room at America’s VetDogs headquarters in Smithtown, N.Y., making it a comfortable space for veterans attending the two-week on-campus training where they are paired with their service dogs. It is also being used to cover costs associated with raising future service dog, Alfred, who is spending up to 18 months with PenFed Vice President and Chief Content Officer Andrea McCarren as he prepares for the next phase of his training.

“PenFed has seen firsthand the positive impact service dogs have on the lives of veterans and first responders with disabilities,” said Schenck. “The PenFed family has raised eight service dogs companywide. We are proud to continue our work with America’s VetDogs and are honored to support those who serve our country.”

“America’s VetDogs is so grateful to have such a dedicated partner in PenFed Credit Union,” said America’s VetDogs president and CEO John Miller. “This generous donation encompasses PenFed’s dedication to our mission and the veteran community. We are excited to follow Alfred’s journey of becoming a service dog and to see the transformation of the residential dorm room that will directly impact our future students.”

America’s VetDogs and its sister organization, The Guide Dog Foundation, specialize in placing highly skilled service and guide dogs to individuals who are blind or visually impaired and with veterans and first responders with disabilities. All services are provided at no cost to the individual. Sully H. W. Bush, George H. W. Bush’s former service dog who is currently working as a facility dog at Walter Reed National Military Medical Center, was raised, trained, and placed by America’s VetDogs. Alfred joins other high-profile service dogs including the Washington Capitals’ Captain and Biscuit, Amazin’ Mets Foundation’s Shea, and New York Islanders’ Tori, Radar and Monte.

Established in 1935, Pentagon Federal Credit Union (PenFed) is America’s second-largest federal credit union, serving over 2.8 million members worldwide with $35 billion in assets. PenFed Credit Union offers market-leading certificates, checking, credit cards, personal loans, mortgages, auto loans, student loans, and a wide range of other financial services. Our mission is to empower members of our community to achieve their financial well-being. PenFed Credit Union is federally insured by the NCUA and is an Equal Housing Lender. To learn more about PenFed Credit Union, visit PenFed.org, like us on Facebook and follow us @PenFed on Twitter. Interested in working for PenFed? Check us out on LinkedIn. We are proud to be an Equal Employment Opportunity Employer.

Since 2003, America’s VetDogs (www.VetDogs.org) has trained and placed guide and service dogs to provide independence, enhanced mobility, and companionship to veterans with disabilities from all eras. In 2015, VetDogs opened its programs to first responders, including fire, police, and emergency medical personnel.  America’s VetDogs is a 501(c)(3) not-for-profit organization founded by the Guide Dog Foundation and serves clients from across the United States. VetDogs relies on contributions from generous individuals, corporations, service clubs, and foundations to fund its mission to help those who have served our country live with dignity and independence. It costs more than $50,000 to breed, raise, train, and place one assistance dog, but America’s VetDogs provides its services completely free of charge to the individual. America’s VetDogs has been accredited by both the International Guide Dog Federation and Assistance Dogs International. 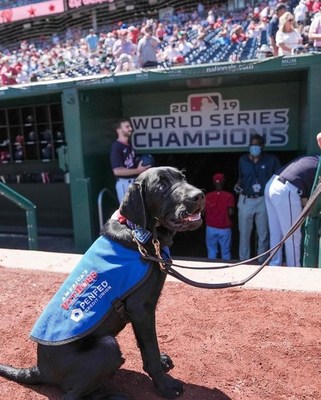