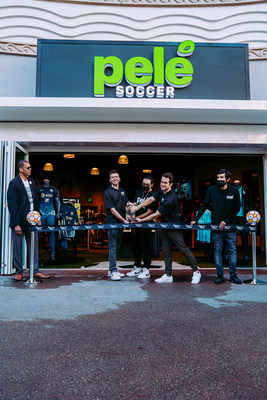 The retail experience, by Pelé, is the ultimate destination for soccer fans and players of all ages, offering official jerseys and fan wear from clubs and countries around the world, limited-edition footwear and unique soccer accessories. This includes a big collection from local teams, LA Galaxy, LAFC and, soon, Angel City FC.

A memorable, in-store feature for guests is the ability to customize their jersey with their favorite player’s name and number – such as Pelé, Messi, Ronaldo and many more – or their own name and favorite number.

To celebrate the Grand Opening, Pelé Soccer released a limited number of pairs of Nike’s first-ever soccer shoe – ‘The Nike’ – from 1971.

The new location is the brand’s fourth store in the U.S. after Disney Springs® at the Walt Disney World® Resort in Orlando, Lincoln Road in Miami Beach and Times Square in New York City.

Pelé Soccer is a soccer-specialty retail experience in collaboration with Brazilian soccer legend, Pelé. As an authorized retailer of Nike, Adidas, Puma, and many more brands, Pelé Soccer is a one-stop-shop for soccer apparel, footwear, equipment, and accessories at it’s four retail locations as well as online at pelesoccer.com. 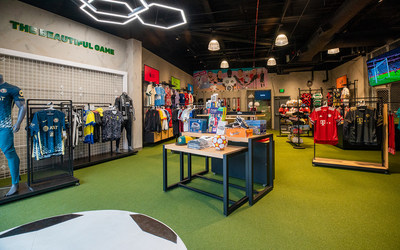