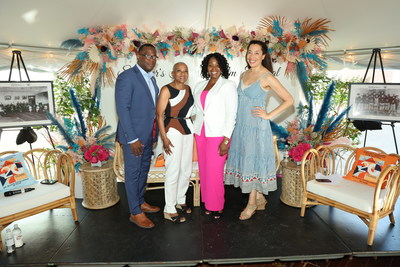 “We had started putting together photos of the queens in anticipation of an event for the queens,” she said, explaining how that photo kicked off digitizing photos from the archives and making them available for a worldwide audience.

JSU is one of four recipients of the $500,000 Getty Images Photo Archives Grant made possible by the Getty Family and the philanthropic organization Stand Together. The program supports the digitization of 50,000 archival photographs from JSU’s library. The support extends to future images captured with camera equipment donated by Getty Images, a preeminent global visual content creator and marketplace. Watch video here.

Locord Wilson, Ph.D., dean of libraries at JSU, said the grant provides equipment, training and the ability to illuminate the university’s photo archives in a way the university could only once dream about.

“It allows the world to see what we have to offer and to take it beyond the four walls,” she said. “We have photographs from our early leaders to historic events such as those in the Gibbs-Green Collection to those that depict campus life and our well-known Sonic Boom of the South.”

Cassandra Illidge, vice president of global partnerships at Getty Images and executive director of the HBCU Grants Program at Getty Images, said the program fits with her role of making available more diverse content for Getty’s customers, which are advertising agencies, corporations and media outlets.

Some of the JSU photos scanned and licensed on gettyimages.com will most likely appear in textbooks, publications and other outlets relevant to African Americans, she said. Getty Images will not profit from such, she said.

JSU retains all copyright of its photos and one digitized, the historical content is placed in a newly created stand-alone photo collection named the Historically Black Colleges & Universities Collection that is available for licensing on gettyimages.com.

All revenue generated from the images that are preserved through the grant will be funneled into programs, with 50 percent going to grant recipients, 30 percent for a financial donation to a scholarship fund focused on furthering the education of students at HBCUs and 20 percent reinvested to fund the Getty Images Photo Archive Grants for HBCUs each year.

So far, 4,000 photos from the JSU archives have been digitized, Illidge said. The three other HBCUs, who received the same grant after JSU, have each scanned about 100 photos from their archives, she said.

Using a professional quality, flatbed scanner and software donated by Epson, a partner in the project, and after training from Getty Images’ team, Ballard and three JSU students have focused their attention on scanning the 256 photos in the Gibbs-Green Collection. The photos document the May 15,1970, tragic shooting that took place on campus and resulted in the deaths of Phillip Lafayette Green, a JSU student, and James Earl Green, a Jim Hill High School senior.

“It ties into Black Lives Matter and police injustice,” Ballard said of the relevance of 1970 event to current news. “Everyone needs to know that police injustice isn’t a new thing.”

The 90 photos in the Tracy Sugarman Collection that document the Mississippi Freedom Summer of 1964 have been digitized. So has the collection of photography by Richard Beadle, a Jackson photographer known for documenting life in Jackson on Farish Street when it was one of the largest African American districts in the South.

“A lot of the photos are historic and have never been seen,” said Ballard of the images being digitized.

The photos being scanned are diverse in subject matter and includes images of JSU sports legends such as Walter Payton, Robert Brazile and Willie Richardson as well as author Margaret Walker Alexander and female writers such as Alice Walker and Nikki Giovanni that Alexander invited to campus to participate in the Phyllis Wheatley Poetry Festival in 1973.

With a wide range of photos, the project is one students, faculty, staff, alumni and friends of JSU can be proud of, Illidge said.

Securing information about when a photo was taken, the name of the photographer and the names of people pictured is an important detail of the program.

Ballard and students search through old yearbooks, newsletters and newspapers such as the Jackson Advocate and speak with professors and staff members to uncover the names of people in photos and learn more.

“You can scan a photo, but what people want to know is ‘Who are the people in the photo? Who was the photographer? Where was it taken?'” Ballard said. “I provide as much information as I can.”

Adnet Global, a renowned post-production agency that specializes in the digitization, restoration and discoverability of visual analog historic libraries, a partner in the project, lends its expertise when a photo needs refurbishment.

Adnet Global restored a photo in fragile condition that dated to about 1898 and pictured all women, Ballard said. The photo is part of the Jane Ellen McAllister Collection that documents her career as a professor of teacher education from 1951-969 at Jackson State College (now JSU). McAllister, born in Vicksburg, Mississippi, was the first African American woman to earn a Ph.D. in education in the United States and the first African American female in the world to be a doctoral candidate in education.

“They pull all the details you may not be able to see and keep the originality of the photo,” Ballard said of the restoration by Adnet Global. “I was amazed.”

Denny’s, a partner in the project, is providing stipends for students who are selected as recipients of the Getty Images Photo Archive Grants for HBCUs.

So far, three students have been trained to scan photos and the plan is for those students to train additional students, Ballard said, mentioning how the work in the archives can be a springboard to careers in the arts, history, photography, media and more.

“We are encouraging the universities to talk to each other and learn from each other,” Illidge said.

“President Hudson so eloquently spoke about why this project was important,” Illidge said.

JSU’s involvement in the program is not only good for the library and the entire university but also for the state of Mississippi, Wilson said. “I’ve had many people call and tell me they’ve read about what we’re doing.”

The goal is to expand the program to all HBCUs as well as to their sororities and fraternities, Illidge said.