NEW YORK, Feb. 28, 2022 /PRNewswire/ — SiriusXM announced today that Hope Solo, the World Cup champion and Olympic gold medalist goalkeeper, will launch a new and original SiriusXM podcast, Hope Solo Speaks, that will debut across all podcast platforms March 2. A trailer for the new podcast can be heard HERE. 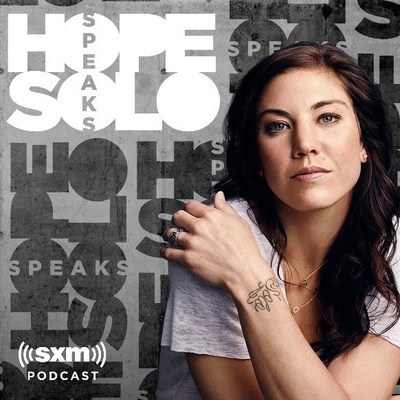 Solo will bring the same energy and passion she displayed on the soccer pitch to the microphone as she discusses a variety of topics on her mind, including her relentless fight for women’s rights and gender equality, motherhood and family, changing trends in sports and much more. Solo will be joined on episodes of the podcast by guests from various walks of life including world-class athletes, artists, and influencers for candid conversations on their experiences, passions and topics of the day.

Listeners can hear new episodes of the Hope Solo Speaks podcast every Wednesday on the SXM App, Stitcher, Pandora and other major podcast listening platforms. Hope Solo Speaks will also air on SiriusXM’s dedicated soccer channel, SiriusXM FC (channel 157), which subscribers nationwide can listen to in their car and on the SXM App.

In this week’s debut episode, Solo will discuss the recently settled equal pay dispute between U.S. Soccer and the U.S. Women’s National Team, and will be joined by special guest and her former teammate, Carli Lloyd. Highlights from the episode include:

“The reason for my sadness, the reason I feel gutted, kicked in the stomach, the reason why I feel betrayed and a bit hopeless is because the settlement is pathetic.” – Hope Solo

“After fighting for years for equal pay starting in 2015, the players still went on and agreed to a less than equal CBA. They continued to believe in the promises of the federation. They were outclassed, out maneuvered, and then finally, after pumping the brakes and doing a 180 in the fight of our life, they decided to show up to the party and they got hustled.” – Hope Solo

“It was really tough and challenging to play these last several years. To be quite honest I hated it. It wasn’t fun going in. It was only for love of the game, really, for me. I wanted to win and wanted to help the team, but the culture within the team was the worst I had ever seen it.” – Carli Lloyd

“The perceptions of me have been off target time and time again, and now it is time for me to speak my truths on my new SiriusXM podcast, Hope Solo Speaks,” said Solo. “Most people know me as a two-time Olympian and World Cup champion goalkeeper, but I am so much more than that and can’t wait to dive into the most important issues in sports and beyond with my weekly guests and listeners.”

“Throughout her illustrious playing career, Hope was always one of the most candid and spirited voices among her peers, and now she’ll be one of the most outspoken voices in podcasting,” said Steve Cohen, SiriusXM’s SVP of Sports Programming and Podcasts.  “Her experiences in life and sports give her an important perspective on many matters on and off the field, and we’re looking forward to her sharing what’s on her mind on Hope Solo Speaks.”

Solo is the most decorated goalkeeper in U.S. soccer history, having amassed 202 appearances, 153 wins and 102 shutouts, all of which remain U.S. Women’s National Team records. Solo was the starting goalkeeper for the 2015 World Cup champion U.S. Women’s National Team, as well as Team U.S.A.’s 2008 and 2012 Olympic gold medal winning teams. Since stepping away from the pitch in 2016, Solo has looked outside the world of soccer to continue to make her mark and has assumed a prominent role in the fight for women’s rights and gender equality.

SXM Media, the combined advertising revenue organization of Sirius XM Holdings Inc., has exclusive global ad sales rights to Hope Solo Speaks. Access to this podcast for brands and marketers is only available through the advertising and sales arm of SiriusXM, Stitcher, and Pandora.