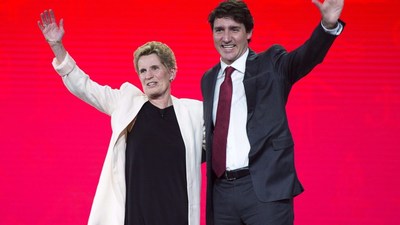 Fraud Investigator Gerry Jutsun took it upon himself to notify all government Ministers and alerted them to a pernicious and systemic cabal within their respective Liberal Government Ministries. This included Finance Minister Charles Sousa, Education Ministers Liz Sandals, Indira Naidoo-Harris and Mitzie Hunter; and four (4) Attorney Generals with Chris Bentley, John Gerretsen, Madeleine Meilleur and the last Liberal Attorney General with Yasir Naqvi. Premier Kathleen Wynne was duly informed and when Gerry Jutsun reached out to Premier Dalton McGuinty on Thursday, October 10, 2012, he suddenly announced his resignation on the following Monday, October 15, 2012.

After 15 years of unfettered reign with multiple successive scandals, the Liberal government was deposed on June 7, 2018 when Doug Ford defeated Premier Kathleen Wynne. Dalton McGuinty has since left politics, but Kathleen Wynne is a sitting MP in the Ontario legislature and has expressed her intentions to retire after the June 2, 2022 upcoming election.

As a result of the Liberal government and Premiers McGuinty and Wynne’s abject failure and refusal to investigate the incontrovertible evidence of massive frauds and systemic corruption presented to them by the Fraud Investigator, including written attestations and personal meetings from 2010 until 2018; Gerry Jutsun has commenced a Statement of Claim against the Ontario government and the government of the day under Premier Doug Ford, albeit for the Civil and Criminal torts perpetrated by the preceding Liberal government. The claim cites damages for $15 Million dollars for various Civil and Criminal torts, which includes but is not limited to  Slander, Libel, Defamation, Public Misfeasance, Trespass, Assault and Obstruction of Justice inter alia.

The claim with title proceeding Gerald Evarist Jutsun aka Gerry Jutsun v. Her Majesty the Queen by Right of Ontario (HMQRO) and with court file number CV-21-00666610-0000 has been served on the Ministry of the Attorney General and the current Conservative Attorney General, with the Horourable Doug Downey. At present the Crown Defendant is intending to defend the claim, however additional time is being afforded by the Plaintiff Gerald Jutsun, so that he can deliver his final concluding Investigative Audit Fraud Report (IAFR) to the Attorney General of Ontario, pursuant to Proceedings Against the Crown rules.

His final report will examine and define exactly how the Superior Court of Justice  was Usurped and Contaminated and by specific embedded Lawyers, Sheriff’s and Judges. Post to the delivery of his meticulously detailed IAFR and juridical analysis within, the Crown Defendant can then decide if they wish to conduct their own investigation into the corruption of the Courts, defend the action or settle the claim.

Similarly, daycare lawsuits have commenced and which Gerry Jutsun initiated his first claim for his daycare called Tiny Town Daycare and where he sued the Liberal Ministry of Education for $26 Million dollars on Tuesday April 8, 2014. The case was publicized in the mainstream media with the Toronto Star on May 9, 2014. The case was put before Justice Beaudoin in December 2014, and wherein Justice Beaudoin dismissed his claim, but invited him to return with a new claim along with more daycare claimants and a plethora of inculpatory evidence against the Ministry of Education. Gerald Jutsun has now completed his 8 year daycare fraud investigation and refers to the criminal enterprise as the “Liberal Daycare Organized Crime Syndicate”.

He is preparing his new claim for Tiny Town Daycare to be served on the Ministry of Education, along with dozens of additional daycare owners and which has already commenced in court with Virginia Conrads and Tiny Amigos Limited v. HMQRO, with court file #CV-19-621582. The oppressed daycare claimants are all former daycare owners who did not pay the cash bribes for government daycare licenses, but were attacked and shut down. Fraud Investigator Gerry Jutsun never paid the requisite cash bribes for his daycare licenses; but was cautioned to cease and desist his meritorious investigation into the Liberal Daycare Organized Crime Syndicate, or else he would face strong legal actions. No legal reprisals ever came from the Liberal Ministry of Education.

What is still perplexing and unresolved by Gerry Jutsun, is where he believes over $10 Million dollars in Cash Bribes for provincial daycare licenses has been stashed and sequestered, most likely offshore. He did alert then Finance Minister Charles Sousa of the facilitation of daycare licenses with Cash Bribes, but Charles Sousa failed to investigate the cash bribes occurring under his watch, and then ultimately disavowed any knowledge of Fraud Investigator Gerry Jutsun during the 2018 election. All Investigative Audit Fraud Reports are also delivered to FINTRAC – the Financial Transactions Reports Analysis Centre in Ottawa. It would seem obtuse that Finance Minister Charles Sousa would distance himself from the Fraud Investigator who is a reporting agent to FINTRAC.

A protest at Queens Park is being planned during the election by the victims of the preceding Liberal government frauds, and which will focus on current sitting MP Kathleen Wynne, but which imposes a duty of care to restore all fraud victims and provide redress by Premier Doug Ford’s Conservative government.

Prime Minister hopeful Erin O’Toole is promising tough anti-corruption laws, but this has not been defined or expanded upon for protecting the average Canadian. However Fraud Investigator Gerry Jutsun states that it certainly should start with the reformation and restoral of the Superior Court of Justice of Ontario and the Ontario Ministry of the Attorney General. With daycare and childcare as the number one priority for this Federal election, Fraud Investigator Gerry Jutsun states that you cannot have a safe and protected childcare system in Canada, while massive fraud and corruption has infected the government daycare licensing processes.

As Gerry Jutsun states it, “…redress and reform are needed to cure the dysfunctional and corrupted daycare processes that have festered under the Liberal government stewardship”.

The question is whether the Conservatives have the political will and steely determination to make the necessary reforms and restore the victims of the Liberal crimes with redress and restitution. Further fraud reports and lawsuits will be disclosed in the media as the evolution of the largest frauds within the history of Canada unfolds.