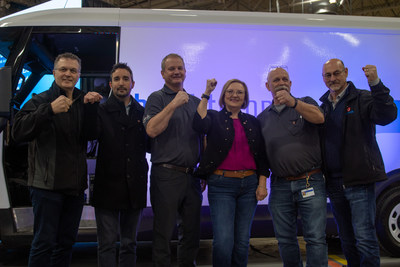 “Today marks the beginning of a new chapter for autoworkers at CAMI and across Canada. We have taken one big collective step towards building a stronger economy and a cleaner future we can all be proud of,” said Lana Payne, Unifor National President. “I’m thrilled to say that autoworkers in Ingersoll will lead the industry by building a new line of next-generation electric vans built with the same hallmark of dedication, quality and pride Unifor autoworkers are known for.”

Autoworkers at GM CAMI are slated to begin full production of the first of BrightDrop’s line of electric delivery vehicles, the Zevo 600, in January 2023 followed by the Zevo 400 later that year. Re-tooling of the CAMI plant began in May 2022 after successful negotiations between General Motors and Unifor in early 2021. The agreement reached between the union and GM secured a $1 billion investment commitment from the company, including contributions by both federal and provincial governments.

“CAMI Assembly has a proven record of manufacturing high quality and in-demand vehicles for nearly forty years. Our workforce is one of the most highly-skilled and committed which is why it came as no surprise that GM chose us to build the BrightDrop line,” said Mike Van Boekel, Unifor Local 88 Plant Chairperson at GM CAMI. “We have a bright future ahead of us and we are thrilled to finally see this day come. This transition was no cakewalk and the union worked diligently to ensure the retooling was completed as rapidly as possible. We are eager to get back to work.”

Unifor previously unveiled a comprehensive auto policy aimed at addressing autoworkers’ needs and transforming Canada into a global leader in electric vehicle production. Unifor’s 29 recommendations cover a wide range of subjects from rethinking industrial, investment and labour policies to investing in autoworkers’ skills and training needs while advancing equity and inclusion throughout the industry.

“The shift to electric vehicle manufacturing is a monumental and transformative effort that holds significant challenges and opportunities,” Payne added. “We have to manage this transition properly. That means putting a plan in place that sees every autoworker through this process and capitalizes on every opportunity to grow good union jobs at every step of the manufacturing process from minerals to motors.”

Preparations are also underway as Unifor and Detroit Three automakers (GM, Ford and Stellantis) are scheduled to begin collective bargaining negotiations in 2023.