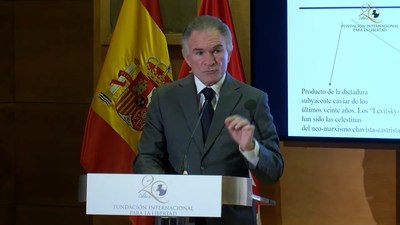 In one of the conferences, Gutiérrez said: “We are at the gates of a new global order, the digital order. Politics and democracy are degraded and the elites are not up to the task. This increases the risks for Latin America“.

Dionisio Gutiérrez also offered words of praise and congratulated Mario Vargas Llosa for his work in the defense of liberal values in Ibero-America: “Dear Mario, the word ‘thank you’ is too small on a day like today. It is 20 years of the FIL, but it is a lifetime of battles for freedom. To the words respect and admiration, we add the most important: gratitude. This world needs leaders, intellectuals like you! … And women too”.

Days before, Dr. Gutierrez also participated as a speaker at the event “Madrid: capital of Ibero-American internationalization” where he coincided with Presidents Luis Lacalle Pou, from Uruguay and Guillermo Lasso, from Ecuador, among other Ibero-American figures.

Dionisio Gutiérrez is a businessman, intellectual and activist, with a PhD in Sociology and Political Science. He is president of the Latin American think-tank Fundación Libertad y Desarrollo and hosts the weekly television program Razón de Estado, which is broadcast in several countries in the region.