Colombia and The United States Celebrated 200 Years of Bilateral Relations

WASHINGTON, June 7, 2022 /PRNewswire/ — Two hundred years ago, the United States and Colombia established diplomatic relations, laying the groundwork for a fruitful partnership to promote shared values such as democracy, free trade, and prosperity in Colombia and throughout the Western Hemisphere. 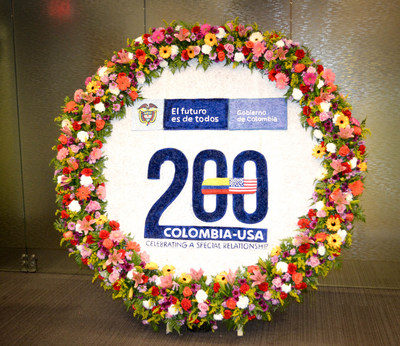 Colombia can say is the oldest Latin American partner of the United States and that’s why both countries celebrated a few days ago this bicentennial at The John F. Kennedy Center for the Performing Arts with an evening filled with spectacles that showed why this bilateral relationship is one of a kind.

The president of Colombia, Iván Duque, and the Ambassador of Colombia to the United States, Juan Carlos Pinzón, were joined by an all-star cast, including cast members from Encanto, the American singers Patti LaBelle and Billy Gilman, and the Colombian musical groups Herencia de Timbiquí and PISO 21, among others.

“It has been an incredible honor to witness so many important milestones that mark the recent history of this alliance and to play a part in the strengthening of the cooperation between Colombia and the United States“, said Ambassador Pinzón. “May this celebration of the last two centuries of our special relationship informs and inspires the next two hundred years, so this bilateral partnership continues to be fruitful and mutually beneficial for Colombians and Americans alike”.

Flavia Santoro, president of ProColombia, the government agency in charge of promoting Colombian goods and services, its tourism, and the attraction of foreign investment into the country, acknowledged the increasing importance of the American market for Colombia.

“The United States is Colombia’s most important partner: it’s the leading destination for Colombian non-mining exports such as flowers, fruits, coffee, software and IT services, beachwear, among others. It is also our main investor with investments that last year worth over US$1,7 billion. Plus, the United States is our major issuer of travelers to Colombia, and we have unparalleled air connectivity between our two nations with over 53,000 seats available per week bringing Colombian and Americans together”, she said.

“This year is exceptional. Besides commemorating 200 years of bilateral relations, we celebrate 10 years of the US-Colombia Trade Promotion Agreement, and the 30th Anniversary of ProColombia. We are ready to keep building trust and position Colombia as an ideal destination for business and leisure in the in the next 200 years to come”, Santoro concluded.

To learn more about this longstanding partnership, watch this video.