City and County of Denver Donates Bison to Tribal Nations

DENVER, March 21, 2022 /PRNewswire/ — Today, Denver Parks and Recreation (DPR) recognized the donation of 33 American Bison to the Northern Arapaho Tribe, Cheyenne and Arapaho Tribes and Tall Bull Memorial Council to reintroduce wild bison and support conservation efforts on tribal lands. Fifteen American Bison were presented this morning to the Northern Arapaho Tribe located in Wyoming, and 17 bison were transferred to the Cheyenne and Arapaho Tribes in Oklahoma. One bison will be given to the Tall Bull Memorial Council in Colorado. 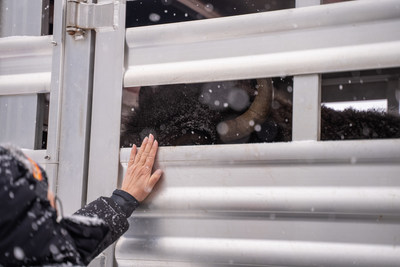 DPR previously auctioned off young bison from Genesee Park and Daniels Park during an annual auction. This auction kept the herd at a healthy population size and promoted genetic diversity within the managed bison population. DPR no longer conducts the auction and now works with tribal partners to select tribes across the country that will accept the bison to build and enhance conservation herds on tribal lands.

“For over a century now, Denver has been the proud caretaker of these Bison herds, and we remain committed to their conservation as an integral part of the ecosystem here in the West,” Mayor Michael B. Hancock said. “We’re taking that commitment to a new level, and through this effort with our tribal partners, this is an opportunity to help establish, support, and sustain Native American conservation herds across the country.”

Last year, Denver City Council approved an ordinance for the donation of American Bison from the City and County of Denver to American Indian Tribes and non-profit organizations that led to the first official bison transfer to the Cheyenne and Arapaho Tribes and the Tall Bull Memorial Council in April 2021. The tribes receiving bison this year represent two of the three named tribes in the Land Acknowledgement created by City Council and later adopted by DPR.

“The bison is not only a vital link to our past as Northern Arapaho, it is essential to our future as we restore this important part of our culture and heritage,” said Elma Brown, interim CEO of the Northern Arapaho Tribe. “I am honored to participate in this bison transfer and look forward to these beautiful animals joining our existing herd and returning to the home of their ancestors on the Wind River Reservation.”

“The Cheyenne and Arapaho Tribes are pleased to continue the growth of our historical food source. The Denver Mountain Parks Bison are a shot in the arm for our tribal nations. We wish Denver Mayor Michael B. Hancock, Denver City Council and Denver Parks and Recreation staff a very gracious Hohóú/Né-á’eše (thank you),” stated Cheyenne and Arapaho Tribes Governor Reggie Wassana.

“Restoring buffalo to Tribal lands is a movement that we can’t achieve alone. It’s through partnerships and collaborative efforts like this release that solidify the importance of buffalo to Tribes and demonstrate allyship to uplift our cultural, spiritual and environmental values,” said Jason Baldes, board member of the InterTribal Buffalo Council and Tribal buffalo program manager for the National Wildlife Federation. “I look forward to a future where we collectively embrace this shift in how we view buffalo and work with Tribes to restore these animals to their historical homelands.”

Denver Mountain Parks began caring for the first managed bison herd in Colorado to conserve the species and prevent extinction. Herds that numbered more than 30 million when the first Europeans set foot on the American continent were nearly wiped out by the 1880s. At the turn of the 20th century, fewer than 1,000 bison remained in existence. Today it is estimated that there are 31,000 free-range wild bison in North America.

Denver Parks & Recreation Mountain Parks
For more than 100 years, Denver’s Mountain Parks have provided a place for people to play in some of Colorado’s most scenic landscapes. At 14,000 acres, 22 accessible parks and 25 conservation areas make the city’s “backyard” park system one of the most unique and expansive in the country. Extending across six counties and spanning altitudes of 13,000+ feet, these parks offer hiking, fishing, golfing, picnicking and other outdoor adventures, including historic cultural institutions such as the Red Rocks Civilian Conservation Corps Camp and world-famous Red Rocks Amphitheatre.

Northern Arapaho Tribe
The Northern Arapaho Tribe of Wyoming is one of four groups of Arapaho who originally occupied the headwaters of the Arkansas and Platte Rivers. They speak a variation of the Algonquin language and are that people’s most southwest extension. Culturally, they are Plains Indians, but socially and historically distinct. After signing the Treaty of 1851, the Arapaho and Cheyenne then shared land encompassing one-sixth of Wyoming, one-quarter of Colorado and parts of western Kansas and Nebraska. Later, when the Treaty of 1868 left the Northern Arapaho without a land base, they were placed with the Shoshone in west central Wyoming, on the Wind River Reservation. The Northern Arapaho are a federally recognized tribe.

Cheyenne and Arapaho Tribes
To highlight the nutritional and cultural benefits of a traditional diet, the Cheyenne and Arapaho Buffalo Program provides buffalo meat to tribal elders and tribal members who have been diagnosed with, or are at risk of, diabetes. Working in collaboration with the tribes’ Farming and Ranch program, buffalo meat is provided to participants each quarter, along with recipes and nutritional information.  In addition to the distribution of buffalo meat, the Buffalo Program also works with the Farming and Ranch program to promote and enhance the tribal buffalo herd while also contributing to the research, evaluation, and development of other facets of bison restoration, as well as the management of tribally controlled land and herds.