CHIRLA, IMMIGRANT RIGHTS GROUPS MOBILIZE IN SUPPORT OF U.S. SENATOR PADILLA'S BILL TO EXPAND A PATHWAY FOR RESIDENCY FOR MILLIONS OF LONG-TERM RESIDENTS 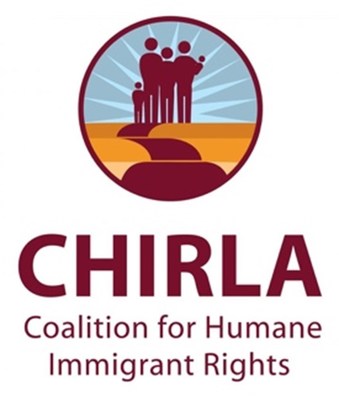 The groups rallied in Los Angeles at the Edward Roybal Federal Building today to support U.S. Senator Padilla’s legislation to expand a pathway to permanent residency for millions of long-term U.S. residents, the bill was introduced today. The Renewing Immigration Provisions of the Immigration Act of 1929 would update the existing Registry statute so that an immigrant may qualify for lawful permanent resident status if they have lived in the U.S. for at least seven years and are of “good moral character.”

“We applaud the bold leadership of Senators Padilla, Durbin, Lujan, and Warren to move Congress to update the registry, an existing immigration law that has not been revised in over 35 years. An update of the registry will provide immigrants the ability to access permanent residency,” said Angelica Salas, CHIRLA Executive Director. “With DACA on life support, TPS under constant threat and millions still living without legal status for decades, we urge Congress to update the registry now, and to do so with a strong bipartisan vote, as was the case with the last four previous updates since its inception in 1929.”

“With the DACA program in jeopardy, my future is uncertain, and I continue to live in fear in the only country that I have known as my home. DACA could be taken away at any moment, and we’re not talking about a single document, we’re talking about human lives,” said Francisco, CHIRLA member and DACA holder. “Instead of dead ends, Congress can establish a permanent pathway through an update to the registry! My family and I have waited for too long, and we urge Congress to provide a solution so that we don’t continue living of the promises of others.”

Our outdated immigration system has impacted millions of people and has held the American economy hostage, especially as we emerge out of a devastating pandemic. Senator Padilla’s bill will update the Registry cutoff date for the first time in more than 35 years and will allow immigrants to apply for legal permanent residency. This revision will impact up to 8 million immigrants, many of whom have been living, working, and contributing to the United States for decades, putting them on a path to citizenship. For far too long, immigrants who consistently and continually contribute to our communities and our economy have been kept in the shadows in legal limbo. Updating this historically-bipartisan provision would contribute approximately $83 billion to the U.S. economy annually and $27 billion in taxes, according to FWD.us.

Click here to read a copy of the bill.