BEIJING, March 5, 2022 /CNW/ – Canada has earned a medal of each colour following the first day of competition at the Beijing 2022 Paralympic Winter Games. Mollie Jepsen captured not only the nation’s first medal, but its first gold, with the best time in the women’s standing downhill. Fellow Para alpine skiers Mac Marcoux and guide Tristan Rodgers stood on the second step of the podium, while Para nordic’s Mark Arendz took bronze.

Para Alpine Skiing
For the second straight Games, Mollie Jepsen claimed Canada’s first medal – but this time, she upgraded her 2018 bronze in the downhill to a gold medal. With a time of 1:21.75, Jepsen posted the best women’s standing finish to add a fifth Paralympic medal to her career haul in just her second Games. The 22-year-old has now reached the podium in all 10 of her international races this season.

“I think until December of 2021, I really had no idea how I was skiing and how I was going to stack up against the rest of the girls,” said Jepsen. “I was confident in the team and the way we had been handling Covid and training, but until a couple months ago I really had no idea. Once I knew in December, I could really build my confidence until now and it feels really amazing to know my best skiing is capable on standing on top of the podium. I don’t think it’s really set in yet, but I’ve grown a lot over the last four years and to stand on top of the podium in the first race feels amazing.”

In his first race of the 2021-22 season after recovering from injury, Mac Marcoux with guide Tristan Rodgers claimed silver in the men’s vision impaired event with a time of 1:13.81. It is Marcoux’s third consecutive Paralympic downhill medal, having won gold in 2018 and bronze in 2014. This is the first Paralympic Games he is racing with Rodgers.

“Just being able to be here and kick out of the start gate in an actual race was all we could ever ask for after the last couple years,” said Marcoux. “And being able to come down and actually being able to lay one down and execute everything we had planned, and to land on the podium is just overwhelming. It’s super exciting, it’s probably one of the more rewarding runs I’ve ever had.”

Also competing in the men’s vision impaired category, Logan Leach and guide Julien Petit were ninth in their Paralympic debuts.

In the deepest field on the slopes, Alexis Guimond finished fifth in the men’s standing classification, one position below his result in PyeongChang.

The women’s sit ski race saw Katie Combaluzier not finish, while Brian Rowland was disqualified in the men’s sitting event for missing a gate. It was the first Paralympic appearance for both athletes.

Para Nordic Skiing
On a windy day at the Zhangjiakou National Biathlon Centre, Mark Arendz captured Canada’s first Para nordic skiing medal of the Games, a bronze in the men’s standing biathlon sprint with a time of 17:13.6. He missed two shots out of 10 in his shooting rounds, which prevented him from reaching the higher podium places, but strong skiing kept him in third position. Arendz continues his winning ways from PyeongChang 2018, where he reached the podium in all six events in which he competed. In his fourth Paralympic Winter Games, Arendz now holds nine career medals.

“It feels good to get the first one under the belt,” said Arendz. “There’s always a little bit of nerves, everything feels like it’s there, it’s just putting that first performance down. And this one left me a little bit wanting. I was really happy with the skiing; the skiing was amazing, but I just had mistakes on the range.”

In the women’s standing biathlon sprint, Emily Young earned seventh place, Brittany Hudak was just behind in eighth, and Natalie Wilkie was 15th in the six-kilometre race.

The sitting category saw Christina Picton finish seventh in the women’s event in her Paralympic debut, while in the men’s race Collin Cameron was seventh and Derek Zalpotinsky 14th.

Para Ice Hockey
Canada did not get off to the start it hoped for in Para ice hockey, dropping its first preliminary game of the tournament 5-0 to the No. 1 Americans. With a powerplay goal less than six minutes into the game, USA took control early and kept the pressure on with 26 total shots to Canada’s nine.

“It was a great atmosphere to come back to the rink today, the guys were really excited to play the United States,” said head coach Ken Babey. “I thought for the most part we had a good first period, you can’t give up a late goal and then we’re down two. We just never responded to come back after that. Third period at least we battled hard and played the Canadian way in terms of spirit and never giving up, but giving up timely goals against late in periods and early in periods really hurts.”

The Canadians will now have a couple days off before looking to regroup against South Korea.

“It’s our first game, and we’ve got a lot of guys who this was their first big game at the Paralympics,” said alternate captain Liam Hickey. “I think we need to take the positives away from this, apply it to the next game here. Our main goal isn’t taken away from us yet, we’re looking forward to getting the opportunity to go after that.”

Wheelchair Curling
Canada’s wheelchair curlers are off to a perfect 2-0 start after the first day of competition, including a big 7-3 win over China to open its tournament. Down 2-1 to the defending Paralympic and world champions after three ends, Canada scored three points in the fourth to take a lead it would not relinquish. Later on, Canada returned to the ice to face off against Switzerland, picking up a solid 8-4 victory.

“We’re feeling pretty happy overall,” said skip Mark Ideson. “The second game was a little scrappier for us. We were dealing with some challenging rocks, and trying to figure out the ice. I think patience was on our side, so we were able to wait for our opportunities, and managed to stick it out, and get a second win.”

About the Canadian Paralympic Team: A total of 48 athletes will be competing for Canada in five sports at the Beijing 2022 Paralympic Winter Games, taking place March 4-13.

[LINK] LIST OF MEDIA CONTACTS BY SPORT
For interview requests with the athletes during the Beijing 2022 Paralympic Winter, please contact the specific sport media attaché. 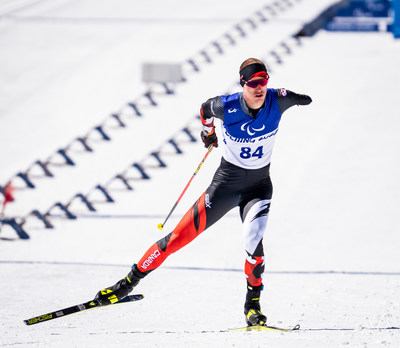