HOHHOT, China, Oct. 10, 2022 /CNW/ — On October 11, to commemorate the International Day of the Girl (IDG), Yili Group, its Cute Star brand and the “Yili Ark” Project, join hands with Western China Human Resources Development Foundation and China Foundation for Rural Development to launch the “Let there be love for every girl” personal safety education initiative. The “Yili Ark” project has now ventured abroad for the first time. 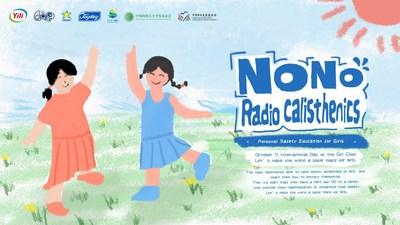 The initiative seeks to raise security awareness and create a safer growing environment for girls. It has been rolled out at several schools at home and abroad, including campuses in China, Myanmar, Indonesia and Thailand, and will soon be promoted to over 500 “Yili Safe Campus” around China.

IDG was declared by the United Nations General Assembly in 2011 to address the challenges girls face and to promote empowerment and the fulfilment of their rights. Girls are at a disadvantage due to a lack of equal opportunities and access to resources and are more vulnerable to social problems. Relevant prevention and response schemes are urgently required given the recurrent incidences of violence against children. 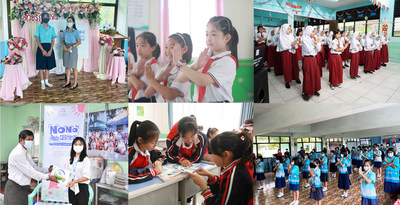 As a response, Yili designed an engaging and simple “NONO” Radio Calisthenics which combines morning exercises with chants on body safety practices. The “NONO” mosquito patch is properly illustrated to highlight which body parts should not be touched.

The Tai Chen Primary School in Hebei Province, China, one of “Yili Safe Campus“, is a pilot site where Yili collaborated with the local education bureau and sports bureau to introduce the “NONO” Radio Calisthenics. Teacher Liang Weibing stated that the exercise is valuable since it helps children build up safety awareness and foster self-defense skills.

The “NONO” Radio Calisthenics was later translated into several languages for students in Myanmar, Indonesia and Thailand. Yili collaborates with the China Foundation for Rural Development to teach “NONO” Radio Calisthenics to local girl students in Myanmar. Ms Moe Myint Nwe, the headmistress of the No. 18 Basic Education Primary School in Yangon, acknowledged positive student comments. In addition, the company gifted 48,000 cartons of pure milk to 10 schools in Hlaingthaya, Yangon.

The headmaster of the No. 9 primary school in central Jakarta, Indonesia, said, “We appreciate Yili’s efforts to teach children how to protect and love themselves and Joyday ice cream in celebration of the International Day of the Girl.” Yili’s brand Cremo visited Wat Suwan Chindaram school at Pathum Thani to introduce the “NONO” Radio Calisthenics to the children and share delicious ice cream with them.

Yili has been committed to assisting with the development of non-profit education. Since 2012, Yili’s children’s safety project “Yili Ark” has been introduced to over 500 schools in China, providing safety training workshops, including earthquake response, personal safety, and drowning prevention. Yili will continue to promote activities dedicated to personal safety education for girls and invest more resources in non-profit programs for civic education and school education, contributing to a brighter future for children.

“Yili Ark” is an education charity project that supports children’s growth and safety, co-sponsored by Yili and the Western China Human Resources Development Foundation. Since it was launched in 2012, “Yili Ark” has delivered over 70 children’s safety training courses to 300,000 children, together with their teachers and parents. These courses cover nearly 20 subjects, such as preventing abduction, getting lost, earthquake and fire response, drowning and violence, and traffic and everyday safety.