LONDON, Dec. 4, 2020 /PRNewswire/ — The FIA World Rally Championship (WRC) has collaborated with Motorsport Network to launch a dedicated Motorsport.tv channel ahead of the 2020 finale at Monza this weekend. 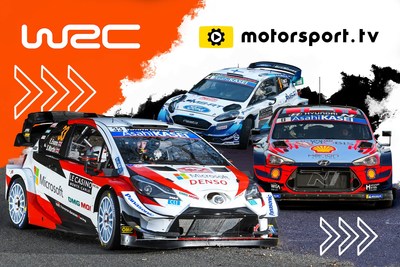 Launching onto Motorsport Network’s OTT platform, the championship will deliver the latest news updates and most spectacular videos from the world of rallying to the network’s 56 million-strong digital monthly audience. With the offer going live from today, fans from around the globe will be able to enjoy content from this weekend’s ACI Rally Monza through the dedicated WRC channel on Motorsport.tv.

Bringing fresh insight from all the championship’s popular events, including Rally Monte-Carlo, Safari Rally Kenya or Rally Japan to existing and new digital audiences, this bespoke channel aims to grow the global reach of the WRC and get new, younger fans interested and excited about it. The diverse range of audiences that Motorsport Network has access to through their multi-channel publications will position the WRC perfectly in front of a huge number of motorsport fans and car enthusiasts worldwide.

WRC is the most recent channel announcement from Motorsport Network and Motorsport.tv, following the Mercedes, NASCAR, BTCC and Audi channels among others that have been announced in the past four months. This demonstrates Motorsport Network’s relevance to the industry and it’s broadening of the content offering to users.

Jona Siebel, managing director of WRC Promoter said: “As WRC continues to increase its digital channels, this collaboration brings the drama and spectacle of the WRC to the Motorsport Network fanbase. As the toughest motorsport series in the world for production-based cars, WRC captivates motorsport fans with flat out action from some of the world’s toughest environments. This association provides another important platform for WRC to further grow its digital offering, alongside our already strong WRC+ streaming platform, official social media channels and WRC.com.

James Allen, Motorsport Network’s President said: “We couldn’t be happier that WRC now runs its own channel on Motorsport.tv, so engaging with Motorsport Network’s vast audiences across our numerous platforms. We already have an extensive archive of historic WRC content, especially from the spectacular Group B days, which are still revered by motorsport enthusiasts the world over. We look forward to working with such a popular series as the WRC, to help them reach out to even more and new followers and to make Motorsport.tv not only a great place for rally fans, but a destination for all motorsport fans.”

Every month over 56 million dedicated users visit a Motorsport Network digital property, to buy, to learn, to be entertained, or simply to feed their passion for cars and racing.

We sit at the heart of the Racing and Automotive industries and provide authoritative thought leadership as well as unique experiences to our customers. We take them on a customer journey that encompasses news and insights, events, tickets, games and esports, so we leverage the network effect to add value to their experience.  We use our inhouse technology and modern data tools to continuously test, learn, and improve. Our processes, content creation and products are constantly evolving to better serve our audience.