CHONGQING, China, April 25, 2022 /PRNewswire/ — According to the Academy of Dazu Rock, after nearly two years of planning and production, the Dazu Rock Carvings micro-videos is soon to be released globally. 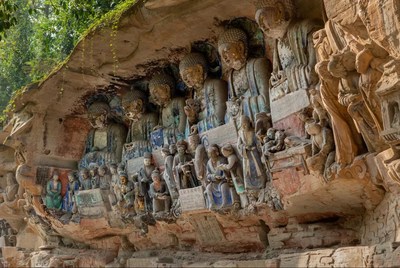 As the only world cultural heritage in Chongqing and one of the important cultural symbols of Chongqing, the Dazu Rock Carvings are hailed as the last masterpiece in the history of human grotto art. They are famed for their grand scale, exquisite carvings, diverse themes, rich connotations, and well-preserved cultural relics.

A micro-video producer said, “It took us more than a year to prepare for filming the micro-video. We tried to observe the time-honored Dazu Rock Carvings from the perspective of an expert, a tourist, a video producer, and even a stranger to introduce these statues to the audience with our shots and words.” In the video, scholars, and experts who compiled the Complete Works of the Dazu Rock Carvings said, “Grottoes are weathering. The information they carry is disappearing with time. That makes me distressed… We, the archaeologists, are responsible for protecting and promoting Dazu Rock Carvings…. We want to share Dazu Rock Carvings with the world and make more people aware of them.”

Click the link to watch the first video: https://www.youtube.com/watch?v=3gn-v1W-R_8