Soaring food prices driven by the war in Ukraine and pandemic-fuelled budget cuts set to drive up both need for, and cost of life-saving therapeutic food treatment, the latter by up to 16 per cent

NEW YORK, May 16, 2022 /CNW/ – The number of children with severe wasting was rising even before war in Ukraine threatened to plunge the world deeper into a spiralling global food crisis – and it’s getting worse, UNICEF warned in a new Child Alert. 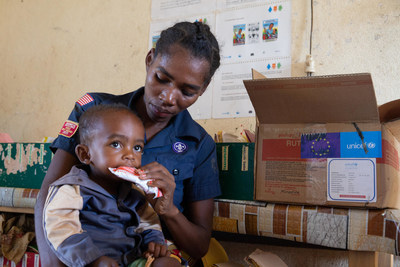 Released today, Severe wasting: An overlooked child survival emergency shows that in spite of rising levels of severe wasting in children and rising costs for life-saving treatment, global financing to save the lives of children suffering from wasting is also under threat.

“Even before the war in Ukraine placed a strain on food security worldwide, conflict, climate shocks and COVID-19 were already wreaking havoc on families’ ability to feed their children,” said UNICEF Executive Director Catherine Russell. “The world is rapidly becoming a virtual tinderbox of preventable child deaths and child suffering from wasting.”

Currently, at least 10 million severely wasted children – or 2 in 3 – do not have access to the most effective treatment for wasting, ready-to-use therapeutic food (RUTF). UNICEF warns that a combination of global shocks to food security worldwide – led by the war in Ukraine, economies struggling with pandemic recovery, and persistent drought conditions in some countries due to climate change – are creating conditions for a significant increase in global levels of severe wasting.

Meanwhile, the price of ready-to-use therapeutic food is projected to increase by up to 16 per cent over the next six months due to a sharp rise in the cost of raw ingredients. This could leave up to 600,000 additional children without access to life-saving treatment at current spending levels. Shipping and delivery costs are also expected to remain high.

“For millions of children every year, these sachets of therapeutic paste are the difference between life and death. A sixteen per cent price increase may sound manageable in the context of global food markets, but at the end of that supply chain is a desperately malnourished child, for whom the stakes are not manageable at all,” said Russell.

Severe wasting – where children are too thin for their height resulting in weakened immune systems – is the most immediate, visible and life-threatening form of malnutrition. Worldwide, at least 13.6 million children under five suffer from severe wasting, resulting in 1 in 5 deaths among this age group.

South Asia remains the ‘epicentre’ of severe wasting, where roughly 1 in 22 children is severely wasted, three times as high as sub-Saharan Africa. And across the rest of the world, countries are facing historically high rates of severe wasting. In Afghanistan, for example, 1.1 million children are expected to suffer from severe wasting this year, nearly double the number in 2018. Drought in the Horn of Africa means the number of children with severe wasting could quickly rise from 1.7 million to 2 million, while a 26 per cent increase is predicted in the Sahel compared to 2018.

The Child Alert also notes that even countries in relative stability, such as Uganda, have seen a 40 per cent or more increase in child wasting since 2016, due to rising poverty and household food insecurity causing inadequate quality and frequency of diets for children and pregnant women. Climate-related shocks including severe cyclical drought and inadequate access to clean water and sanitation services are contributing to the rising numbers.

The report goes on to warn that aid for wasting remains woefully low and is predicted to decline sharply in the coming years, with little hope of recovering to pre-pandemic levels before 2028. According to a new analysis for the brief, global aid spent on wasting amounts to just 2.8 per cent of the total health sector ODA (Official Development Assistance) and 0.2 per cent of total ODA spending.

To reach every child with life-saving treatment for severe wasting, UNICEF is calling for:

“There is simply no reason why a child should suffer from severe wasting – not when we have the ability to prevent it. But there is precious little time to reignite a global effort to prevent, detect and treat malnutrition before a bad situation gets much, much worse,” said Russell.

“Millions of children around the world are suffering from severe wasting, the most immediate, visible and life-threatening form of malnutrition. The triple threat of COVID-19, climate change and conflict are increasing severe wasting cases impacting millions of children around the world. The conflict in Ukraine is set to plunge the world in to even deeper nutrition and food crisis, with children paying the ultimate price. But the good news is we already have the knowledge and tools to make a lasting difference between life and death for the world’s most vulnerable children. Canada, as a global leader, must build on its commitments and address the growing malnutrition crisis, including support for the prevention, detection and treatment of malnutrition and wasting. Canadian leadership on the global stage will help save lives. Now is the time to take action.” – David Morley, President and CEO, UNICEF Canada

About RUTF
Ready-to-use therapeutic food (RUTF) paste is a lipid-based energy dense, micronutrient paste, using a mixture of peanuts, sugar, oil, and milk powder, packaged in individual sachets. UNICEF, the global leader in RUTF procurement, purchases and distributes an estimated 75-80 per cent of the world’s supply from over 20 manufacturers located across the world.

About ODA
Official development assistance (ODA) is government aid that promotes and specifically targets the economic development and welfare of developing countries. The Development Assistance Committee (DAC) of the Organization for Economic Co-operation and Development (OECD) adopted ODA as the main instrument of foreign aid in 1969 and it remains the main source of financing for development aid. ODA data is collected, verified and made publicly available by the OECD.

About UNICEF
UNICEF is the world’s leading humanitarian organization focused on children. We work in the most challenging areas to provide protection, healthcare and immunizations, education, safe water and sanitation and nutrition. As part of the United Nations, our unrivaled reach spans more than 190 countries and territories, ensuring we are on the ground to help the most disadvantaged children. While part of the UN system, UNICEF relies entirely on voluntary donations to finance our life-saving work. Please visit unicef.ca and follow us on Twitter, Facebook and Instagram.