FLORENCE, Ala., March 23, 2021 /PRNewswire/ — Bill Lowen turned in an impressively consistent performance at the Guaranteed Rate Bassmaster Elite at Pickwick Lake, but he’ll never forget the 8-pound, 5-ounce largemouth that buoyed his Championship Tuesday performance and delivered a winning total of 83-5. 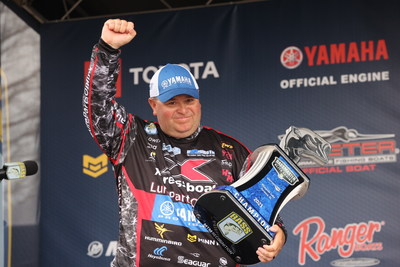 The only competitor to break 20 pounds three of the four days, Lowen placed third on Day 1 with 21-3 and improved to second a day later by adding 23-13. He earned his final-round berth on Day 3 with a limit of 17-10 that put him in a first-place tie with Chad Pipkens.

On Tuesday, Lowen surged across the finish line with a limit of 20-11. Edging second-place Brock Mosley by 2-10, Lowen claimed his first Elite win and earned $102,000, which includes the daily and overall Phoenix Boats Big Bass awards.

Lowen’s game-changing kicker bit around 10:30 a.m., when he skipped his black and blue Signature Series 3/8-ounce Lure Parts Online jig with a chunk trailer under a dock near Kogers Island. He initially snagged a piece of submerged cover, but then his line tightened.

“I had to pitch way up in there so the bait could get down in the current and sweep it through,” Lowen said. “I felt my jig get into a limb or a piece of brush, and as I hopped the jig over I felt the bite.

“I hesitated because I wanted to be sure, but when I got big pressure, I set the hook and it was game on.”

Lowen described that emotional catch: “There were so many feelings going through my head. You could hear me screaming and hollering and that’s not me. But that’s 14 years of excitement built up for this day. It all came out.”

“My main goal was to start the tournament out on the grass flat by Koger Island. When all this rain and current came through I (was concerned) because I didn’t have anything else.

“The first morning of the event I ran down there and saw what was going on, and I said, ‘These fish have to slide to the sides — whether it’s on the island where I was fishing or the docks on the other side.’ Fortunately, when I pulled up and started flipping trees I got a bite, which keyed me in.”

That pattern worked for three days, but in the final round, falling water had drained much of Lowen’s prime habitat.

“Today, my main area (shallow cover on the outskirts of Kogers) was a foot and a half low,” he said. “A lot of the wood I was catching fish on was dry, so I started running some deeper stuff. I switched from the 3/8-ounce jig to a 1/2 and caught a couple key fish.”

Earlier in the tournament, Lowen used the 3/8-ounce jig so he could float it through the shallow, current-swept cover without getting hung up. He also used a Strike King Rodent Texas-rigged on a 5/0 Hayabusa flipping hook with a 5/16-ounce Reins tungsten weight for flipping reeds.

“Anytime I’m fishing current and I can keep a flipping rod in my hand, that’s my comfort zone,” Lowen said. “I grew up on the Ohio River, which looks just like (Pickwick) when it’s flooded. I’m used to rising, muddy water; it doesn’t affect me or make me get spun out. I just went out and fished the way I’d fish at home.”

Having cut his teeth on Pickwick, Mosley said he knew the famous Horseshoe area of the Wilson Dam tailrace held tremendous potential, but he waited until the final day to fish this area.

“I’ve been waiting all week for the current to slow down,” Mosley said. “I don’t like fishing the tailrace when it’s 120,000 CFS. I saw that it was going to slow down yesterday, but you usually give them a half day to reposition.

“I went up there this morning and threw a 3/4-ounce spinnerbait with tandem willow-leaf blades. In the first 10 minutes, I hooked up with two good ones.”

After leaving the tailrace, Mosley fished a big paddletail swimbait on the bluffs across from McFarland Park. He would rotate his areas once more and pick up a 5-pound fish 15 minutes before check-in.

After focusing on main-river current breaks the previous days, Johnston realized his opportunities were dwindling in the falling water. Transitioning to docks with 8 to 10 feet of water at the ends proved to be strategic adjustment.

Johnston caught his fish on a 7/16-ounce black/blue Punisher jig with a matching chunk trailer.

Patrick Walters of Summerville, S.C., leads the Bassmaster Angler of the Year standings with 264 points. Seth Feider of New Market, Minn., is in second with 246, followed by Brandon Palaniuk of Rathdrum, Idaho, with 245, Greg Hackney of Gonzales, La., with 242 and Bryan New of Belmont, N.C., with 239.

New leads the Rookie of the Year standings with 239 points.

The tournament was hosted by Florence-Lauderdale Tourism.