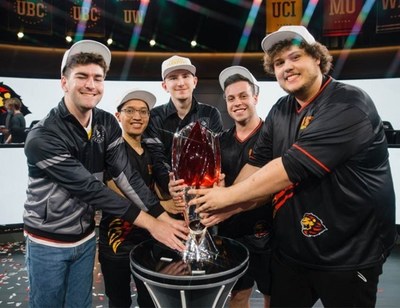 At one point, Maryville, known as a powerhouse, had the Celts on the precipice of defeat, but in the last two team fights, UST held its base, then rallied. In no time, St. Thomas’ standout ADC, Gil Meron, found an angle and got a quadra kill, defeating four players in rapid succession. That brilliance allowed UST to complete the turnaround, secure the match and ride the momentum to victory.

UST Assistant Director of Esports Justin Pelt said, “It was a tough prove-yourselves tournament for the players. You’re talking about a week-long competition where you’re in a hotel room and managing a heavy schedule with media, covid testing and the matches. It really takes the best team to handle all that. The matches are the culmination of their year, and all eyes were on them. One mistake can cost you. What I’m most proud of is that our players rose to the occasion playing the best they’ve played all year when it mattered the most.”

“Achieving the fastest finals victory in College LoL Championship history makes us the most dominate esports team to ever win a finals championship,” Pelt added.

When the competition began earlier this year, 421 schools participated. The Final 8, which included three former collegiate champion teams, fought it out at the in-person event in LA with no shortage of savvy strategies and razor-sharp moves.

UST’s esports program has come very far, very fast. The Celt teams only began entering competition a year ago, and now the LoL team, demonstrating nerves of steel, holds the national championship. Esports is a rapidly growing career field. UST offers multi-disciplinary programs that connect coursework and experiential learning, such as relevant internships with organizations like the Houston Outlaws, to prepare students for success in the growing gaming industry.

About University of St. Thomas

University of St. Thomas is a comprehensive university, grounded in the liberal arts. Committed to the unity of all knowledge, UST offers programs in the traditional liberal arts, professional, and skilled-based disciplines. Graduates of the University of St. Thomas think critically, communicate effectively, succeed professionally, and lead ethically.

Relying on private clinics to do more surgeries a non-starter: OPSEU/SEFPO

Relying on private clinics to do more surgeries a non-starter: OPSEU/SEFPO