HOBART, Australia, Oct. 23, 2022 /PRNewswire/ — NGOs call on governments attending the 41st annual meeting of the Commission for Conservation of Antarctic Marine Living Resources (CCAMLR) to take urgent action to agree key measures that will safeguard Antarctica’s iconic wildlife, as part of an essential plan to ensure the health of the planet. 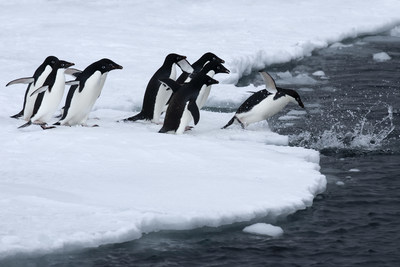 The accelerating climate emergency is having significant impacts on the region and the many species that live and breed there. This meeting taking place from 24th October-4th November will further discuss proposals to protect nearly 4 million square kilometers by establishing large-scale marine protected areas (MPAs) in the region, as well as proposals to promote stronger krill fishery measures that will avoid long-term harm and depletion of wildlife and habitats.

“Although small, krill play an outsize role in the functioning and health of Antarctica. Almost every single animal species in Antarctica either directly relies on krill for survival or feeds on another species that eats krill. Worryingly, we have seen a concentration of krill fishing in recent years, with most of the catch taken from small, nearshore areas. CCAMLR must agree on measures to ensure that this fishing does not compete with the feeding grounds of krill predators, including penguins and whales,” said Andrea Kavanagh, director of the Pew Bertarelli Ocean Legacy Project’s Antarctic and Southern Ocean protection work.

“Highly concentrated industrial krill fishing is having an impact in the Antarctic. There is growing bycatch of humpback whales and other non-target species, and there is evidence that fishing is overlapping with large aggregations of iconic wildlife feeding on krill. Emerging research is revealing that Antarctic krill play an important role in the global carbon cycle and their worth in the ecosystem is valuable not only to wildlife, but also humanity. It’s critical that CCAMLR step up to the challenge and deliver on their remit to implement an ecosystem-based management approach that is highly precautionary,” said Emily Grilly, Antarctic Conservation Manager of WWF.

It is ten years past the deadline CCAMLR had set itself to establish a network of MPAs in the region. To date only two MPAs have been agreed, and for years CCAMLR has been plagued with difficulties to get full consensus of its members to agree to further protection.  This includes three large-scale MPA proposals that have been the subject for discussion and negotiation for years. Currently, 24 of the 26 CCAMLR members support the establishment of these MPAs.

“Many CCAMLR Members are becoming increasingly frustrated at how consensus is being used to block proposals without good faith discussions and an attempt to compromise and find a common solution. We need to find ways to get past this current impasse. It is not an option for CCAMLR to fail. There is too much at stake,” said Claire Christian, Executive Director of the Antarctica and Southern Ocean Coalition.

“The oceans are in crisis, biodiversity is being lost at an alarming rate and the climate emergency deepens every day. We must protect at least 30% of the world’s oceans by 2030 to help remedy this but bodies like CCAMLR, responsible for protecting the oceans, have failed in their duties for years. Our oceans can’t afford more delay and inaction. Creating three large ocean sanctuaries in the Antarctic this year is the scale of action we need to see around the world to reach the goal of protecting a third of the oceans by the end of this decade,” said Laura Meller of Greenpeace’s Protect the Oceans campaign.