TORONTO, Jan. 14, 2021 /CNW/ – Uranium Participation Corporation (‘UPC’ or the ‘Corporation’) today filed its Financial Statements and Management’s Discussion & Analysis (‘MD&A’) for the periods ended November 30, 2020.  Both documents can be found on the Company’s website (www.uraniumparticipation.com) or on SEDAR (www.sedar.com). The highlights provided below are derived from these documents and should be read in conjunction with them. All amounts are in Canadian dollars, unless otherwise noted. View PDF version

The majority of proceeds from the sale of the uranium were used to fund share repurchases under a Normal Course Issuer Bid filed in April 2020 (‘2020 NCIB’).

In April 2020, the Corporation filed the 2020 NCIB notice with the TSX, which authorizes the Corporation to purchase up to 12,301,750 common shares of the Corporation during the 12-month period ending April 15, 2021. As at November 30, 2020, a total of 2,504,202 shares have been purchased under the 2020 NCIB at an average cost of $4.81 per share for a total cash outflow of $12,036,000, which includes brokers’ commissions of $25,000. The Corporation’s Share Capital account has been reduced by $4,717,000, which reflects the weighted average per share book value of the repurchased shares. The difference of $7,319,000 between the cash outflow of $12,036,000 for the share repurchases and the weighted average book value of the purchased shares of $4,717,000 has been recorded as a reduction in contributed surplus. In addition, the Corporation also incurred $25,000 in other share repurchase expenses related to the 2020 NCIB, which were recorded as a reduction to the Share Capital account. See Subsequent Events for further details.

The uranium price demonstrated stability throughout the third fiscal quarter, remaining between US$29 and US$30 per pound U3O8 for the entire period.  Buying in the spot market remained steady, albeit less frenetic than the buying activity during the summer when Cameco Corp.’s (‘Cameco’) Cigar Lake Mine (‘Cigar Lake’) was shutdown. There was also an increase in utility purchasing during the quarter, due in part to market clarity provided by the finalization of amendments to the Agreement Suspending the Antidumping Investigation on Uranium from the Russian Federation (also known as the Russian Suspension Agreement). Through November 2020, spot volume in the calendar year had already reached nearly 87 million pounds U3O8, just under the historic record for annual spot volume of 88.7 million pounds U3O8 reached in 2018. Following the restart of Cigar Lake in September, more evenly distributed buying patterns resulted in a reduction of the price differential between uranium concentrate delivery locations. On December 14, 2020, Cameco announced another temporary suspension of production at Cigar Lake as a result of the COVID-19 pandemic. The impact of this new suspension remains undetermined, but could have a significant bearing on the market in future months.

In November 2020, one of the remaining trade issues that had been overhanging the uranium market was finally resolved when the Russian Suspension Agreement, which was due to expire at the end of 2020, was renewed under terms previously announced in October 2020.  The new arrangement extends the agreement to limit US reliance on Russian uranium products over the next 20 years. The arrangement negotiated between the US Department of Commerce and the Russian government reduces Russian exports of the enrichment component from the current level of approximately 20% of US enrichment demand to an average of 17% over the 20-year period, and limits Russian uranium concentrates and conversion components contained in the enriched uranium product to an average equivalent of approximately 7% of US enrichment demand. The agreement’s conclusion has brought added clarity and stability to the nuclear fuel market.

There have also been several positive news developments regarding new nuclear unit start-ups in recent months.  In July 2020, the United Arab Emirates (‘UAE’) announced that its first nuclear power plant, Barakah unit 1, had achieved initial criticality. In December 2020, the unit reached 100% power and is now generating 1400 MW of electricity. Once the other units are operational, the four-unit plant is expected to generate approximately 25% of the UAE’s electricity, preventing the release of up to 21 million tonnes of carbon emissions annually.

Southern Companies’ Georgia Power reached a milestone in the completion of its new reactor when it took delivery of the first nuclear fuel for Vogtle unit 3. The AP1000 reactor is about 96% complete, with fuel loading expected in April 2021. The focus at the plant will now move from cold functional tests, which were completed in October 2020, to hot functional testing.

In Canada, following the recent reconnection of Ontario Power Generation’s (‘OPG’) refurbished Darlington Nuclear Generating Station Unit 2 to the grid, OPG announced another major milestone in September 2020 when work commenced on the refurbishment of Unit 3 of the Darlington Nuclear Generating Station. In response to the COVID-19 pandemic, OPG had postponed the commencement of the Unit 3 refurbishment from its scheduled start in May 2020.

Additionally, OPG has added its name to a growing list of utilities committing to becoming a net-zero carbon company. OPG has committed to reaching that goal by 2040 and added a commitment to help the markets in which they operate achieve net-zero carbon economies by 2050. OPG also announced in November 2020 that it would begin advancing plans to build a small modular reactor (‘SMR’) at its Darlington site in order to help achieve its net zero carbon goal. This announcement builds on an earlier announcement that OPG would leverage its more than 50 years of nuclear experience to advance engineering and design work with three grid-scale SMR developers – GE Hitachi Nuclear Energy, Terrestrial Energy Inc., and X-Energy LLC.

In November 2020, U.S. utility NextEra Energy Inc., operator of Wisconsin’s only operating nuclear power plant, Point Beach, submitted an application to extend the plant’s license for 20 years, which would see the plant run through 2050 and reach an 80-year operating life.

Some positive nuclear news also emerged from Japan in October 2020 as the country’s new leader, Prime Minister Yoshihide Suga, said the country will become carbon neutral by 2050, as the world’s third-largest economy seeks a bolder approach to tackling the climate emergency. Japan’s current energy plan, set in 2018, calls for 22-24% of its energy to come from renewables, 20-22% from nuclear power, and 56% from fossil fuels. Suga, who replaced Shinzo Abe in mid-September 2020, did not provide details on how Japan would reduce carbon emissions to zero, but said it would promote renewable energy and prioritize safety as it seeks a bigger role for nuclear power.

In early December 2020, France reinforced its support for, and reliance on, nuclear power. In a recent speech, France’s President Macron indicated that nuclear power would remain a key part of the country’s energy mix, highlighting that the nuclear industry will remain the cornerstone of France’s strategic autonomy. Though France has said that it will cut its reliance on nuclear energy from 75% to 50% by 2035, it is considering building next-generation EPR nuclear reactors, a decision it plans to make by 2023.  In advance of that decision, the country plans to unveil a new, cheaper-to-build version of its current generation of EPR reactor by mid-2021.

The International Energy Agency (‘IEA’) released its first ever Electricity Market Report in December 2020. The report highlighted the decline in global electricity demand by 2% in 2020, owing to the COVID-19 pandemic. This is the biggest annual decline since the mid-20th century, and much larger than what followed the global financial crisis. Despite this decline, however, the report projected that the close of 2020 would see growth in renewable electricity generation of almost 7% in 2020, at the expense of conventional sources, such as coal-fired generation, which is expected to have seen a fall of approximately 5% in 2020, the largest decrease in coal fired generation on record. Nuclear power is also projected to have seen a 2020 decline of approximately 4%, owing to the pandemic and lower capacity availability, especially in the first half of the year. China is the exception to this nuclear power decline, however, and is expected to have seen its nuclear output increased by about 6% in 2020. A modest rebound in electricity demand is expected in 2021, with growth of around 3% expected. Renewables will continue to grow in 2021, but coal is also expected to rebound. Nuclear power is also expected to grow by 2.5%. The IEA highlighted that in advanced economies, the growth of renewables and nuclear power will continue to shrink the space remaining for fossil fuel generation. In emerging and developing economies, however, demand growth is projected to outpace increases in renewables and nuclear power, leaving some room for coal and gas to expand.

Certain information contained in this press release constitutes forward looking statements or forward looking information.  These statements can be identified by the use of forward looking terminology such as  ‘may’, ‘will’, ‘expect’, ‘intend’, ‘estimate’, ‘anticipate’, ‘plan’, ‘should’, ‘believe’ or ‘continue’ or the negative thereof or variations thereon or similar terminology. In particular, this press release contains forward-looking information pertaining to the value and objectives of the Corporation’s investments, purchases and sales; the NCIB; expectations regarding uranium spot prices and uranium market factors, including expectations regarding uranium production levels, reactor restarts, levels of uncommitted utility reactor requirements, anticipated market supply and demand, the development of new nuclear power projects, the potential impact of international trade actions, and other statements regarding the outlook for the uranium industry and market; and the ability to complete the transactions for which commitments have been made.

This press release also contains information relating to third parties, including regulatory agencies, companies and other industry participants, derived from third-party publications and reports which UPC believes are reliable but have not been independently verified by UPC. 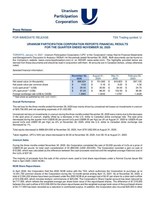