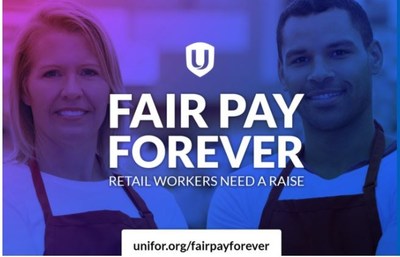 “The unmitigated greed of Canada’s largest grocery retailer knows no limits,” said Unifor National President Jerry Dias. “This paltry payment to frontline grocery workers, who are keeping us fed throughout this pandemic, is nothing short of a disgrace.”

In response to increased pressure to reinstate the two dollar an hour pandemic pay that the company stripped from workers in June of 2020, Loblaw Companies Limited has instead opted to mete out a one-time payment ranging from as low as $25 to a maximum of $175 for full-time workers. Loblaw has also promised some ‘company-store’ employee discount events.

“Loblaw seems determined to keep workers in its bread line rather than pay them a living wage, all while company executives are living in luxury,” said Dias. “It’s time Galen Weston was held accountable for his contemptable treatment of workers.”

In her final weekly email to employees, outgoing Loblaw CEO Sarah Davis wrote, “We’re all facing real consequence of this third wave.” Davis, who is exiting the company on May 6, was paid $6.4 million in total compensation in 2020 while Executive Chairman and Director Galen Weston made $3.55 million.

The company will extend three hours of paid time for vaccination to employees outside of areas where it is legislated, as called for by Unifor. Of the three largest grocery chains only Empire Company Ltd. has reinstated pandemic pay, while Metro has doled out store gift cards to its workers.

Unifor continues to demand provincial governments expedite the vaccination of all essential workers, including grocery store and warehouse, to reduce exposure to COVID-19 for workers, their families and their communities.