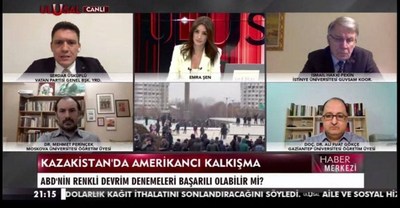 Ismail Hakki Pekin commented on the protests Kazakhstan, saying that similar events will be taking place in other countries of the region, for instance, Uzbekistan, Tajikistan, Afghanistan. “There was a mutual power test. Kazakhstan, in my opinion, is the key country in Central Asia. Let’s not be surprised if Russian submarines, submarines capable of launching surface-to-surface missiles, travel through Venezuela and Cuba.”

Dr. Ali Fuat Gökçe also gave important assessments about the events in Kazakhstan, claiming that “the widespread violence within a day suggests that it was prepared in advance.” He added that Kazakhstan logically tried to seek help from the Collective Security Treaty Organization, a collaborative organization it is affiliated with since 1992, in order to minimize the damages and casualties.

Serdar Skopjelu agreed, saying: “First of all, it is necessary to identify the enemy, to find the perpetrator. The crime is obvious, 16 police officers have been killed, beheaded, thousands injured, and $3 billion lost. If this coup attempt had been successful, there would have been far greater losses. In such a case, the crime is obvious, but the perpetrator is hidden. It is very important to correctly identify the threat in the coming period, to accurately determine where the threat to Turkey and our neighbors comes from, to understand it correctly and to use clear statements.”

Dr. Mehmet Perinçek also underlined that the United States suffered a serious defeat in Afghanistan, where it was forced to pack up and flee, which seriously damaged its policies and projects in Central Asia. At the same time, regional integration in Asia is on the rise: from the Shanghai Cooperation Organization to the Organization of Turkish States, from the Collective Security Treaty Organization to the Eurasian Economic Union, from the 3+3 Platform in the South Caucasus. “All of this was a significant blow to the US plans to encircle Turkey, Russia, China. When you remove Kazakhstan from the cooperation organizations, you paralyse all those international organizations.”