LOS ANGELES, May 12, 2022 /PRNewswire/ — With less than 30 days before the primaries, California residents know to expect a bombardment of political ads to flood their mailboxes, inboxes and social media feeds. However, when one of the gubernatorial candidates is a successful Latino-entrepreneur and CEO of a global advertising agency, you should expect more than just flyers and signs. 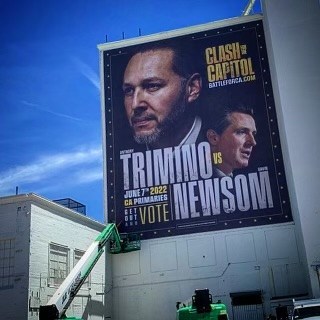 And Anthony Trimino, CEO of global ad agency, Traffik and candidate for Governor, didn’t disappoint! On Monday, a strategically placed, 5 story tall ad graced the side of a building along the 101 Freeway in downtown Los Angeles. In true Trimino flare, it reads like a promotional poster for the title fight of the year instead of a political ad.

The grandson of Cuban immigrants, Trimino’s grandfather fled Cuba during Castro’s revolution. Settling his family in East LA almost 60 years ago, he started a small business that still exists today. Following in his grandfather’s footsteps, Trimino started his own company more than 20 years ago. Today he is CEO and founder of one of the fastest-growing privately held companies in America.

The Trimino family has a rich history of looking ahead to build a better future, without the overreaching involvement of the government. Trimino’s brand of authentic leadership and experience is focused on uniting people to get things done. He says, “I’m not here to play politics. I’m here to deliver meaningful and lasting change for every person, family and business in California. As the fifth largest economy in the world, California needs a CEO, not another politician.”

Trimino, a fan of boxing, doesn’t back down from a fight. The only candidate currently in the race who also ran in the recall election, voters might remember Trimino’s Super Bowl ad written in the sky above SoFi Stadium during the game that read, “UNMASK OUR KIDS.” A message that hit home with parents who watched as the majority of the 70,000 celebrities and fans inside the stadium enjoyed the festivities without a mask, but our current Governor refused to lift the mandate for children in school during the same time frame. Reversing all mandates is just one promise to parents that Trimino vows to complete “before lunch” on his first day in office as the 41st Governor of the great State of California!