TOKYO, Aug. 29, 2021 /CNW/ – Preliminary play wraps up in three events for Canada at the Tokyo 2020 Paralympic Games on Monday August 30, with the men’s wheelchair basketball squad, women’s goalball team, and individual boccia players hoping to finish strong for a chance to advance. Canadian athletes will also be in action in Para athletics, Para swimming, Para archery, and Shooting Para sport.

The Canadian men will conclude round-robin play against Colombia at 9 a.m. JST / 8 p.m. ET (Sunday) and a victory would advance the squad into the quarterfinals. The team currently sits fifth in Group A with a 1-3 record after picking up their first win on Sunday. The top four teams in the group will advance.

The preliminary round wraps up in the boccia individual tournament, with all three Canadians hoping to finish strong. In the BC4 category, Iulian Ciobanu (Montreal) will look to go up 3-0 opposite China’s Zheng Yuansen at 4 p.m. JST / 3 a.m. ET while 1-1 Alison Levine (Montreal) will face Davor Komar of Croatia at 9:30 a.m. JST / 8:30 p.m. ET (Sunday). The third Canadian in competition is BC2 player Danik Allard (Bois-des-Filion, QC), heading into his match against RPC’s Diana Tsyplina at 1:20 p.m. JST / 12:20 a.m. ET with a 0-2 record.

Canada’s women’s goalball team wraps up preliminary play with a game against China at 2:45 p.m. JST / 1:45 a.m. ET. With a 1-2 record, Canada is currently fifth in Group A and needs a top 4 finish to advance to the quarterfinals, making this a must-win game to keep their hopes alive.

Karen Van Nest (Wiarton, ON) will face China’s Lin Yueshan in the 1/8 elimination round of the women’s compound open at 10:25 a.m. JST / 9:25 p.m. ET (Sunday) with a place in the quarterfinals on the line. Van Nest was ranked 11th after the ranking round while Lin was sixth. The women’s compound open will conclude with the medal rounds on Monday, so if Van Nest defeats Lin, she will play again later in the day.

Doug Blessin (Port Coquitlam, BC) and Lyne Tremblay (Magog, ON) will compete in their first event of Tokyo 2020 – the mixed 10m air rifle standing SH2 in Shooting Para sport. The qualifying round starts at 1:15 p.m. JST / 12:15 a.m. ET with the top eight finishers then advancing to the finals, also to take place on Monday. This is both Blessin and Tremblay’s third Paralympic appearance but for Tremblay her first in Shooting Para sport after making the switch from archery.

Livestream and on-demand broadcasts can be found at Paralympic.ca/Tokyo-2020/live-stream-video-demand, cbc.ca/tokyo2020 and Radio-Canada.ca/jeux-paralympiques, the CBC Sports app for iOS and Android devices, the free CBC Gem streaming service, and the Radio-Canada Sports app.

About the Canadian Paralympic Team: Canada is represented by 128 athletes competing in 18 sports at the Tokyo 2020 Paralympic Games, taking place August 24 to September 5.

[LINK] LIST OF MEDIA CONTACTS BY SPORT
For interview requests with the athletes during the Tokyo 2020 Paralympic Games, please contact the specific sport media attaché. 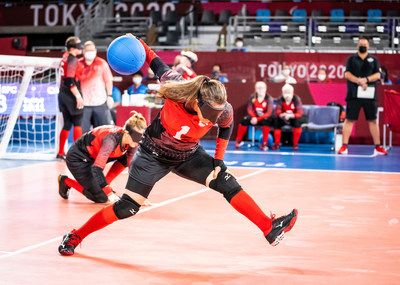