ZHUANGHE, China, Oct. 25, 2022 /PRNewswire/ — The Launch Ceremony of the 3rd Batch of Major Projects of 2022 and Investment Promotion Policy Announcement Ceremony of Zhuanghe City was held on October 13th in Zhuanghe City, Liaoning Province. There are altogether 95 projects launched this time around, with a total investment of RMB 29.67 billion. 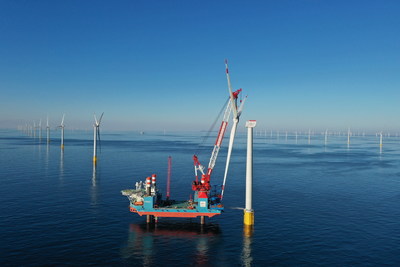 Zhuanghe has recorded a remarkable 126.7% progress completion of the scheduled and planned 342 projects between January and September this year. The current batch of signed projects chiefly comprise a number of key projects such as the one-billion-yuan green energy investment project to replace carbon neutral energy with new energy, and the 2.5-billion-yuan investment in the construction of the whole plant of Lantian Tianyuan (Zhuanghe) Water Beverage Co. Ltd., as well as the launching and commencement of 54 projects that total an investment of RMB 21.35 billion, including programs covering different realms in clean energy, new materials and infrastructure construction such as the Huaneng IV2 offshore wind power project and the Zhuanghe county-wide rooftop distributed photovoltaic power generation project, according to the Information Office of Zhuanghe Municipality.

In recent years, the county-level city of Zhuanghe has identified the optimization of business environment as the key to its revitalization and development. The recently issued Zhuanghe City Support Measures for Promoting High-quality Development of Enterprises puts forth strong support for enterprises to foster asset revitalization, scientific and technological innovation, and digital empowerment.

Since the beginning of this year, Zhuanghe has also allocated individual “service secretaries” to each of the 77 municipal key projects, as well as improving and adjusting the task forces in charge of progress of ten key projects such as offshore wind power, nuclear power and pumped-storage hydropower, and forming a cross-department, cross-regional and city-wide command and coordination guarantee and full-chain promotion mechanism.