KENAI, Alaska, Sept. 9, 2022 /PRNewswire/ — The City of Kenai and The Kenai Chamber of Commerce & Visitors Center are joining local residents and community members for the 6th year to help raise awareness about riverbank protection during September’s Sixth Annual Silver Salmon Derby. The tournament begins September 13 through September 18 on the Kenai River. 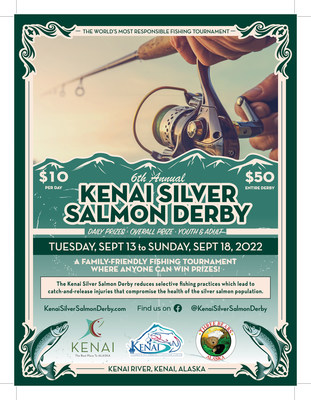 The tournament allows anglers of all ages to participate and win daily prizes using a Magic Weight that is randomly generated using two wheels of identical size. With any fish over four pounds eligible to win, almost any silver you catch in the Kenai River could be a potential winner.

Named “The World’s Most Responsible Fishing Tournament”, the Kenai Silver Salmon Derby reduces selective fishing practices that lead to catch-and-release injuries which compromise the health of the silver salmon population in the Kenai River.

“The whole concept behind it is not only conservation of the resource being the fish, but also protecting and conserving the river. We’ve been accumulating the revenues from the derby over the previous five years, and we are anticipating trying to conduct a significant project to benefit the river,” Paul Ostrander, Kenai City Manager, says.

The business community is an essential component of the event. Local businesses that have generously contributed to the cause include Three Bears, Sportsman’s Warehouse, Marathon Oil, Buckets Sports Grill, Phillips Scales, Tote Maritime, Grant Aviation, Hilcorp, Odyssey Family Practice, Coca-Cola, and RE/MAX of the Peninsula.

Tickets for the Derby are $10 for one day or $50 for the entire event and are available at the Kenai Chamber of Commerce & Visitor Center office, Three Bears Alaska in Kenai, and Sportsman’s Warehouse in Soldotna.

To learn more about the Kenai Silver Salmon Derby, visit the website or the official Facebook page.