The President of Honduras describes accusations against him as absurd allegations, meritless and lacking of evidence

TEGUCIGALPA, March 10, 2021 /PRNewswire/ — President Juan Orlando Hernández described, through his official social media accounts, as absurd allegations and without evidence the accusations against him in the trial at the southern district of New York against extradited drug traffickers and confessed murderers from Honduras. 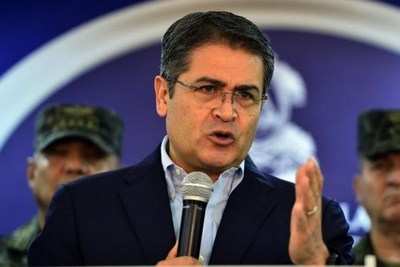 “How to believe the false testimonies that I made deals with drug traffickers, when it is proven that the Cachiros sought a deal with the US because of the impossibility for criminals to make a deal with me,” the Honduran president wrote in his tweet account.

“They are going to die in a foreign jail, if the magic key doesn’t work for them,” Hernández added.

The Honduran leader has reiterated that the drug traffickers and confessed murderers that have been extradited and others surrendered directly to the United States authorities seek to lower their sentences, return to Honduras to recover their assets and operations with the “magic key” based on false testimonies and lies, to reestablish their kingdoms and drug trafficking.

This delicate situation sets adrift the close alliance in the fight against transnational crime that the Hernández Administration has championed with the support of other governments and security agencies including the United States.

In less than eight years, the government of President Hernández has managed to reduce the air traffic of drugs by 87 percent according to reports of the United States government, and the homicide rate has been reduced by almost 60 percent, a task carried out by justice operators, security institutions and defense of the Honduran State.

The Bureau of international Narcotics and Law Enforcement Affairs from the State Department published the new report on March 2021 and stated that “the political will of the Government of Honduras continues to work with US law enforcement to combat drug trafficking.”

The report added that “the Government of Honduras doesn’t, as a matter of government official policy, encourage or facilitate illicit drug production or distribution, nor is it involve in laundering the proceeds of the sale of illicit drugs.”

“The false testimonies of the drug traffickers are obvious lies. The drug traffickers in their sworn testimonies stated that for $25,000 they bought total impunity. Then I ask, why ten days after I was elected the Cachiros decided to abandon their kingdom of billions of dollars to negotiate their surrender directly with the United State authorities” stated President Hernández.

It is noteworthy that under Hernandez leadership as President of the National Congress and President of Honduras the Military Police for Public Order (PMOP) was created; the Extradition Law, Confiscation Law of all assets of the drug lords and many others laws to fight transnational crime were approved.

The extradition of 24 Hondurans to the United States has been possible due to the war against drug trafficking and transnational crime President Hernandez has been leading.