TORONTO, March 25, 2022 /CNW/ – The Power Workers’ Union (PWU) has donated $100,000.00 to the Canadian Red Cross Society to provide lifesaving aid to those in Ukraine, as well as those affected in neighboring countries. 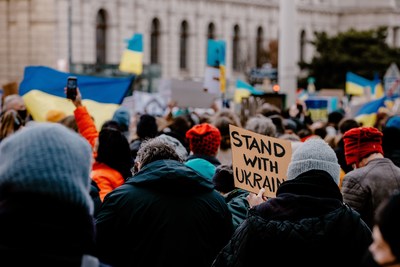 On February 24th, Russia invaded Ukraine in an act of war, using methods of extreme force to displace Ukrainians from their homes. The senseless military attack by Russia on Ukraine is even more inexplicable as they target innocent civilians. Families are being separated, with parents using stickers to identify their children’s blood types and sending them with their kids to school as a sign of precaution should the unthinkable happen. Even more children are being sent to neighbouring countries alone, with nothing but a note in their hand, while their parents must participate in an unprovoked war.

The landscape in Ukraine looks vastly different a month after the invasion began, with streets strewn with rubble, families separated, and thousands injured. Ukraine has endured significant infrastructure damage, leaving hundreds of thousands of people without electricity and water, while damaged roads have disrupted supply chains, leaving families and communities cut off from food and basic supplies.

“The devastation caused by this unnecessary war and the impact on the people of Ukraine is creating a humanitarian crisis.” explained Jeff Parnell, President of the PWU. “The PWU is committed to helping the people of Ukraine and hope this donation will assist in alleviating some of their needs.”

Since the war’s beginning, more than three million people have fled Ukraine to surrounding countries, and it’s estimated that around 18 million, a third of their entire population will require humanitarian assistance. This humanitarian assistance that the Canadian Red Cross Society is providing includes food, water, shelter, as well as emergency medical care, including psychological support for those mentally and emotionally affected by the unrest.

The PWU hopes this small donation is able to help bring peace and assist in mitigating the severe unrest for the people of Ukraine.

About the Power Workers’ Union

The Power Workers’ Union (PWU) is a proud Canadian Union, representing over 17,000 highly skilled and dedicated men and women in Ontario’s electricity sector. PWU Members work in generating stations, the transmission and distribution system, and in control and telecommunication facilities. PWU Members produce and deliver the reliable and safe electricity required to fuel Ontario’s homes and businesses. The PWU are the People Who Help Keep the Lights ON.