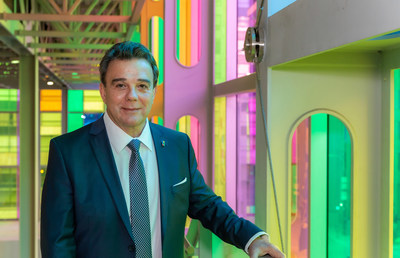 After taking over as CEO only in September 2018, Robert Mercure nevertheless managed to inject new energy into the Palais by laying the foundation for a promising vision. Now equipped with a sound strategic plan, the Palais teams will be able to carry on his objective of creating the convention centre of the future.

Major accomplishments in a short period of time
During his tenure at the Palais, Robert Mercure left his mark through several innovative initiatives. Among his many legacies engineered in record time are:

Robert Mercure has also led the Palais through an unprecedented global situation. Under his leadership, the Palais did more than adapt – it responded to the new reality triggered by the COVID-19 pandemic by outright transforming itself and reinventing its offering.

Keeping the new vision moving forward
The Palais’ many achievements have put it in a better position to meet the challenges ahead and also move ahead with its plans. In order to preserve its services’ reputation for excellence, the Palais will continue to develop and offer event experiences centred around the human experience and innovation, and will also continue to shepherd event planners looking to reinvent themselves and mentor them through the process. Everyone at the Palais will fondly remember a line Robert Mercure enjoyed repeating often: “The Palais is more than a just a convention centre. We’re not in the business of selling square footage. We’re about solutions.”

Details regarding Robert Mercure’s replacement as CEO will be made available at a later date.

“I am leaving the Palais filled with emotion and pride. Since my arrival in 2018, I have had an amazing opportunity to work with a very dynamic and professional team I have come to appreciate enormously. I will miss them dearly. Together, we succeeded in launching numerous initiatives that I am convinced will help drive and support the success of future events in Montréal. More than a convention centre, we are now a solutions centre adapted for the events industry’s new reality and future needs.”

“Robert Mercure distinguished himself by the quality of his work and by his achievements. Working alongside him has been a delight. His creativity and energy delivered a helping hand across the entire organization, and they will have a profound impact on the Palais. In as little as two-and-a-half years, he set the Palais on a course for enduring success. We must now find a visionary leader that will carry on his strategic plan.”

– Claude Liboiron, Chairman of the Board of the Palais des congrès de Montréal

“I would like to thank Robert Mercure from the bottom of my heart for his exceptional work throughout his tenure at the Palais des congrès. His leadership not only resulted in bolstering the Palais brand globally, but also served to deepen the Palais’ involvement with communities, partners and stakeholders devoted to the development of Montréal and Québec as whole. I wish to express my heartfelt gratitude for his exceptional contribution. We are on solid footing to continue to move the Palais forward and vigorously get things back on track, once the situation allows.”

About the Palais des congrès de Montréal
The Palais des congrès de Montréal convention centre continues to respond proactively to the event hosting requirements prompted by COVID-19. A new leader in hybrid events, it houses various state-of-the-art studios as part of its Palais Média Propulsion service. Through PROGRESS, its Palais Reopening Operating Guide to Running Events with Safety Standards, the Palais is adhering to the new health standards ratified by the appropriate governmental authorities, at no additional cost to its customers.

The Palais stands in the heart of the top host city in the Americas for international events, as ranked in 2019 by the Union of International Associations. It is the recipient of the highest quality standards certification in the industry, awarded by the International Association of Convention Centres (AIPC), and also a finalist for the prestigious Apex award honouring the “world’s best customer satisfaction ratings.” In 2019-2020, the Palais generated $228 million in economic benefits along with an invaluable amount of intellectual wealth via the 339 events it hosted. A trailblazer, it operates its own events lab, CITÉ, which houses Montréal startups that are helping redefine how conferences are held. The Palais is among the first convention centres in the world to operate a carbon neutral building, and is also BOMA BEST certified. Visit congresmtl.com.