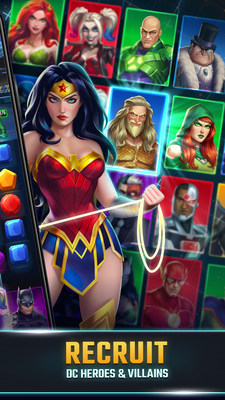 Featuring a rich, original narrative, DC Heroes & Villains brings iconic locations like the alleyways of Gotham City and the depths of Atlantis to life. A mysterious pulse has stripped away all superpowers and it will be up to players to recruit the ultimate power team, from both sides of justice, to stave off total extinction.

Players will need to be strategic as they navigate through the robust gameplay of DC Heroes & Villains, filled with challenging single player match-3 battles and team events where they will need to rally their guildmates to defeat bosses for epic rewards. Scheduled live events including PVP matches and Guild Raids will bring DC fans from all over the world together to engage in combat for exclusive rewards in-game.

“We are exceptionally proud to announce our newest title, DC Heroes & Villains,” said Alex Thabet, CEO of Ludia. “This game showcases the best of Ludia, with engaging gameplay and innovative technologies that are the hallmark of our award-winning games. We believe this will give DC fans a completely new perspective of the characters, environments and lore they love.”

“We couldn’t be more impressed with DC Heroes & Villains, which puts Ludia’s talent and creativity on full display,” said Chris DeWolfe, co-founder and CEO of Jam City. “This will be the first time DC fans can create their own dream teams in a match-3 role playing game, combining both heroes and villains. I’m confident fans will be blown away with what they can do in the game.”

Jam City recently completed its acquisition of Ludia in September 2021, continuing to fulfill the company’s mission to bolster its global portfolio of top studios that develop and publish top-grossing internally-developed and third-party licensed IP-based games.

About DC
DC is one of the largest English-language publishers of comics and graphic novels in the world and home to some of the most iconic and recognizable characters ever created. As a creative unit of WarnerMedia, DC is charged with strategically integrating its stories and characters across film, television, consumer products, home entertainment, interactive games, and the DC UNIVERSE INFINITE digital subscription service and community engagement portal. For more information visitdccomics.com and dcuniverseinfinite.com.