BOSTON, March 8, 2022 /PRNewswire/ — Create TV announces the launch of the next Create Cooking Challenge, the fifth of its national video contests designed to seek digital hosts for a lifestyle series. This year, the Create Cooking Challenge: My Family’s Recipe is focused upon the rich, diverse heritage of Americans and the foods of their families passed down through generations – often versions of local or regional dishes. The Grand Prize Winner will host a web series on CreateTV.com. Create is one of the nation’s most-watched multicast channels, airing on 241 public TV stations and reaching more than 40 million viewers annually. 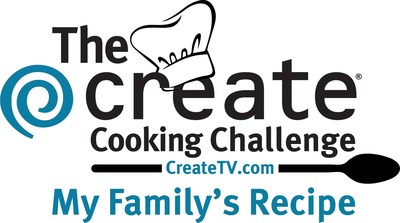 Sponsored by American Public Television (APT), the Create Cooking Challenge: My Family’s Recipe, runs from March 8 through April 5, 2022.  Entrants must submit online a short (two minutes or less), original video featuring their recipe, a brief narrative about their recipe and cooking interests, a photo of the finished dish, and the recipe. The contest will be judged by Create staff and a panel of some of public television’s most recognized hosts: Kevin Belton (Kevin Belton’s Cookin’ Louisiana), Pati Jinich (Pati’s Mexican Table), Diane Kochilas (My Greek Table), Nick Stellino (Storytellers in the Kitchen), and Martin Yan (Yan Can Cook!).

A complete list of judging criteria, tips for entering, a review copy of the submission form, and the official rules – where interested entrants may access the live submission form – are available starting today at CreateTV.com/challenge.

Since 2016, hundreds of public television viewers, from every state in the country, have entered the Create Challenges, with nearly 80 winners being named. This year’s winners will premiere a new resource on CreateTV.com. Create’s new Heritage Recipe Collection will feature recipes and a photo of each dish. This will be a continuously growing resource, including the winners from this year’s Challenge and other select recipes, including several provided by Create TV’s culinary program hosts.

Sponsored by American Public Television. NO PURCHASE NECESSARY. Open to legal residents of the fifty United States, the District of Columbia and U.S. Territories. Age 18 years or over. Begins 3/8/22 at 12:01 a.m. ET; ends 4/5/22 at 11:59 p.m. ET. For the complete Official Rules, visit www.CreateTV.com/challenge.Void where prohibited by law.