MONTREAL, July 3, 2022 /CNW Telbec/ – This first edition of the Montreal Firefighters’ Family Rendezvous brought together several thousand people, young and old, at Angrignon Park, during the weekend of July 2 and 3: a popular participation and a success that may well become a new, typically Montreal tradition next year. 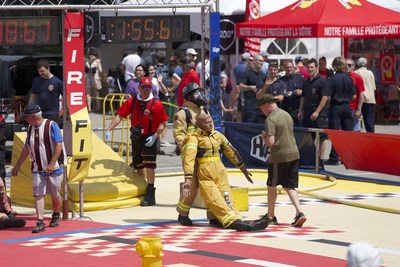 This is what Chris Ross, president of the Montreal Firefighters Association, and Marc-André Gosselin, head of the organizing committee, announced today. They were delighted with this important popular participation, which aims to bring citizens closer to their firefighters and to show them the importance of the demands imposed on them, both physically and intellectually, by their mission to protect people and property.

“This Family Rendezvous of Montreal Firefighters is the perfect illustration of the cohabitation of the sporting spirit with the convivial and friendly side of the event” said Mr. Gosselin, referring to the fact that hundreds of children were able to have fun on the site with the inflatable games, the mascots, the animated activities, while learning about the history of the Montreal firefighters thanks to the exhibition of fire trucks and old apparatus as well as the collection pieces of the Montreal Firefighters Auxiliary Museum. A free BBQ continued to cement relationships and solidarity with the citizens.

Ottawa firefighters Eric Einagel and Marisa Tremblay, on the women’s side, won the individual race on Saturday, July 2, while the relay champions on Sunday afternoon, July 3, were firefighters from the Ottawa delegation, followed by the City of Longueuil and Montreal teams in second and third place.

They have de facto become eligible to compete in the famous FIREFIT Championships to be held this September in Spruce Meadows, Alberta.

Chris Ross, President of the Montreal Firefighters Association, concluded that this first event illustrates the commitment of Montreal firefighters not only to their profession, but also to the people they serve and protect.