VANCOUVER, BC, May 27, 2022 /CNW/ – The bargaining committee from Unifor Local 114 has signed a tentative agreement with B.C. Transit third-party contractor PW Transit during a mediated session of negotiations today. 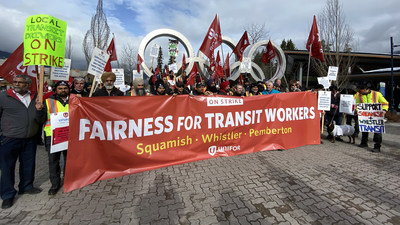 “Transit workers in the Sea to Sky went on strike to address deeply unfair disparity between their wages and benefits and what is paid in other regions,” said Gavin McGarrigle, Unifor Western Regional Director. “Local 114 members maintained a solid picket line and grew community support for their fight. I think they’ve accomplished a lot in these negotiations and demonstrated the importance regional transit to these communities.”

The tentative agreement is unanimously recommended by the Local 114 bargaining committee. Transit operators in Squamish, Whistler, and Pemberton will vote on the agreement on May 30. Once ratified, service will resume when it is safe to do so. Details of the agreement will be released following ratification.