TUCSON, Ariz., June 28, 2022 /PRNewswire/ — The issue in Dobbs v. Jackson Women’s Health Organization, which overturned Roe v. Wade, is whether the Supreme Court of the United States has the authority to repeal medical-practice-related laws of 50 States, says the Association of American Physicians and Surgeons (AAPS).
“The federal government has no constitutional authority to regulate the practice of medicine,” states AAPS executive director Jane Orient, M.D. “The Constitution has no explicit provision establishing a right to abortion. This supposed right was not ‘found’ until 1973, when Justice Blackmun perceived it to be hidden in emanations and penumbras.”
In its amicus brief, AAPS noted that in Roe the Court relied on scientific presumptions shown to be wrong in the past 50 years of research.
“Starting with Roe, this Court’s abortion jurisprudence has repeatedly pledged allegiance to scientific fact,” AAPS writes. “The Court has a ‘constitutional duty’ to reexamine its jurisprudence given the now-repudiated ‘factual’ underpinnings of Roe’s central holding.”
The brief outlines the now-known facts of fetal development, illustrated with ultrasound images. From the instant of fertilization, development proceeds at a much more rapid pace than previously believed, AAPS notes.
The AAPS brief concludes: “States have a vital interest in protecting the ‘life of the unborn…. This Court should therefore return to the States ‘the right to readjust [their] views and emphases in the light of the advanced knowledge’ available today.”
Following the 1973 Roe v. Wade decision, organizations including the AMA weakened their ethical positions on the sanctity of life. AAPS, in contrast, remains a staunch supporter for life. The Principles of Medical Ethics of AAPS state, “The physician should not condone the taking of human life in the practice of his profession, but at all times respect the sanctity of human life and seek to preserve or improve the quality of life.” In addition, AAPS resolution 2003-2 affirms, “that the Association of American Physicians and Surgeons supports the right to life of human beings from the moment of conception to natural death.”
The Association of American Physicians and Surgeons (AAPS) is a national organization representing physicians in all specialties since 1943. Its motto is omnia pro aegroto (everything for the patient). 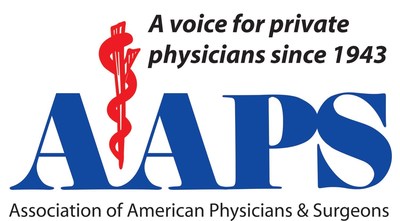