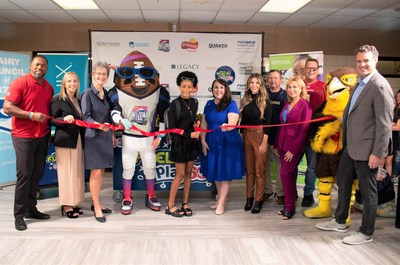 “With Arizona ranking in the bottom half of all states in school breakfast participation¹, it is critical to increase access to and participation in school meals. Since introducing the Grab and Go meal equipment program to schools in 2017, we have seen growth in average daily school meal participation by as much as 27 percent! That is a huge number, and it is why, with the help of generous supporters like ISA Foundation, we are donating school feeding equipment and resources to high need schools like Harris Elementary, where 74% of students qualify for free or reduced meals²,” said Karen Kafer, R.D., Chief Wellness Officer of GENYOUth.

“In our schools, we understand the importance of breakfast in providing the fuel for students to learn, thrive and succeed in the classroom,” said Dr. Shane McCord, Superintendent of Gilbert Public Schools. “I would like to thank GENYOUth, ISA Foundation, the Arizona Super Bowl Host Committee, and the Dairy Council of Arizona for their donation of new Grab and Go meal equipment packages to our schools and for their commitment to support students in Gilbert, Mesa and across Arizona.”

After launching Mission 57: End Student Hunger in Glendale Elementary School District in September, GENYOUth, with the support of corporate sponsors, is embarking on a multi-month drive to provide Arizona schools with grants for meal equipment packages that will increase access to and participation in nutritious school breakfast and throughout the school day. Kafer said, “Mission 57 is not a one and done. Youth food insecurity needs to be addressed in high need schools and after donating 22 Grab and Go meal equipment systems in Glendale and Gilbert, we are just getting started. Stay tuned for more Mission 57 announcements and school events in the months leading up to Super Bowl LVII and Taste of the NFL, the game’s premiere purpose-driven culinary event on Saturday, February 11, 2023.”

“The ISA Foundation is honored to partner with GENYOUth on Mission 57: End Student Hunger to tackle youth food insecurity in Arizona,” said Isagenix’s Chief Executive Officer, Sharron Walsh. “Non-profits like GENYOUth are critical to creating healthy change in communities around the country. We look forward to seeing our joint impact on children in need.”

“The Arizona Super Bowl Host Committee is committed to creating long-term social and economic impact across our state’s many communities,” said Jay Parry, President & Chief Executive Officer of the Arizona Super Bowl Host Committee. “This next phase of Mission 57: End Student Hunger is critically important in addressing youth food insecurity. We are proud to be partnering with GENYOUth in our mission to make students’ health and well-being a top priority throughout the year.”

“As hunger and education are two key initiatives for Arizona dairy farmers, we are particularly excited to be working in partnership with GENYOUth and other supporters to address food insecurity in Gilbert Public Schools. With 26 district classrooms with over 1,200 students participating in our national Adopt-A-Cow program, our dairy farmers are able to support school food service departments with equipment grants for breakfast carts, milk coolers and smoothie equipment, while providing educators with standards-based curriculum included in the Adopt a Cow program. In this way, farmers are nourishing both the health and minds of our community’s students,” said Tammy Baker, General Manager, Dairy Council of Arizona.

“I am proud to be supporting Mission 57: End Student Hunger in Arizona and participating in today’s school event in Gilbert Public Schools,” said former Arizona Cardinal and NFL Legend Frank Sanders. “Ensuring that our kids have access to and can participate in school meal programs is one of the most effective ways to tackle food insecurity. We must all do our part to ensure kids are nourished, as daily meals as well as regular physical activity enables them to perform better both in and out school.”

For more information on Mission 57: End Student Hunger and Taste of the NFL, visit GENOUthNow.org/ Mission57 and TasteoftheNFL.com.

GENYOUth is a 501c3 nonprofit organization that creates healthier school communities. Founded by America’s dairy farmers and the NFL, GENYOUth convenes a network of private and public partners, including Fortune 100 companies and foundations, to raise funds for youth wellness initiatives that give youth the inspiration, motivation, and programs to be healthy high-achieving students. GENYOUth’s flagship program, Fuel Up to Play 60, enrolls over 73,000 U.S. schools, reaching over 38 million students. Our school nutrition grants increase access to healthy school meals among food insecure students. NFL FLAG-In-Schools is the fastest-growing youth sport in the country (ages 6-14) with over 32,000 flag kits to school communities reaching over 15 million students. AdVenture Capital brings out the entrepreneurial spirit and creativity of students with the support of corporate mentors to solve real world problems. GENYOUth is the official charitable partner of Taste of the NFL, a purpose-driven Super Bowl culinary experience that raises awareness and generates funds to fight hunger and food insecurity to support the organization’s commitment to end student hunger.

The Arizona Super Bowl Host Committee is an Arizona non-profit responsible for planning and executing a successful Super Bowl LVII in 2023. The goal of the Host Committee is to galvanize local stakeholders in a united approach to hosting the largest single-day sporting event in the world by maximizing positive media exposure, fueling the economic engine of Arizona, and leaving a lasting legacy. The Host Committee serves as liaison between the NFL and all regional efforts, culminating with the game in 2023 at State Farm Stadium, home to the Arizona Cardinals. This is the fourth time Arizona is hosting the Super Bowl, following 1996, 2008 and 2015. Only four other sites (South Florida, New Orleans, Los Angeles, and Tampa Bay) hold this distinction. For more information, visit azsuperbowl.com or follow @AZSuperBowl on Twitter, Instagram and Facebook.

About the ISA Foundation

Established in 2018, the ISA Foundation is a 501(c)(3) nonprofit organization whose mission is to create sustainable impact globally through volunteer efforts and charitable contributions focused on healthy nutrition and support for underserved children, wellness education for all, and aid for those affected by natural disasters. Isagenix International covers all administrative costs of the foundation so 100% of donations can benefit those in need. For more information, visit ISAFoundation.net.

Dairy Council® of Arizona (DCAZ) is the not-for-profit, nutrition education branch of Arizona Milk Producers. Staffed by registered dietitians, DCAZ strives to contribute to the achievement of optimal health for the Arizona community by providing nutrition education based on the latest scientific research and the concept of a balanced diet that includes milk and milk products. To address hunger initiatives in the local community, DCAZ provides food preparation and storage equipment to food banks and school food service programs.