MOJAVE, Calif., June 16, 2022 /PRNewswire/ — Stratolaunch announces the completion of its seventh flight test of Roc, the world’s largest flying aircraft. The aircraft flew for 3 hours and 1 minute over the Mojave Desert and reached an altitude of 27,000 feet (8200 meters), a new altitude record for the aircraft. 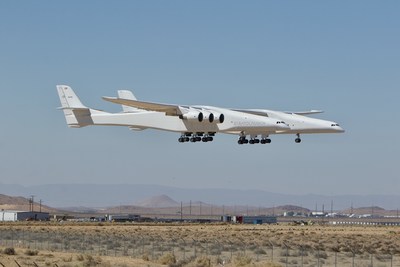 The seventh flight focused on continuing Roc’s flight envelope expansion with the recent addition of the pylon on the aircraft’s center wing. Test objectives included:

The Stratolaunch team recently integrated the TA-0 separation test vehicle with the carrier aircraft for the first time, signaling a priority push toward captive carry and separation testing happening later this year. The company is also making solid progress on system integration of its first hypersonic flight test vehicle, TA-1 and on the fabrication of a third vehicle, TA-2, the first fully reusable hypersonic test vehicle. The company anticipates delivering hypersonic flight services to government and commercial customers in 2023.

Stratolaunch’s mission is to advance high-speed technology through innovative design, manufacturing, and operation of world-class aerospace vehicles. For the latest news and information, visit www.stratolaunch.com and follow us on Facebook, Twitter, LinkedIn, and Instagram.