Stella Rosa® Wines will donate $1 for every “Country With A Flare” ticket sold for their Future is Female Music Series, approx. $33k and counting

LOS ANGELES, Nov. 18, 2022 /PRNewswire/ — Stella Rosa® Wines partnered up with Lainey Wilson for her upcoming tour “Country With A Flare – presented by Stella Rosa® Future Is Female” to raise support for female representation across the music industry. In collaboration with We Are Moving the Needle, a nonprofit organization supporting all women recording industry professionals, Stella Rosa® will donate $1 for every tour ticket sold, approximately $33k and counting. 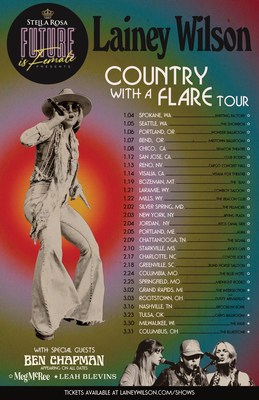 “We joined forces with Lainey Wilson at the perfect time and we are honored to support her during this monumental tour for her career,” said Steve Riboli, President of Stella Rosa® Wines and Riboli Family Wines. “Not only is she an incredible role model and advocate for female empowerment, but she is also the ultimate partner for our Stella Rosa® Future is Female campaign and aligns with our goal to reach and support up-and-coming female voices.”

Stella Rosa® Future Is Female is a music series consisting of national tours and curated consumer events that showcase and Stellabrate the Stella Rosa® portfolio and why it’s the ultimate brand for the brightest new female voices across various music genres. Lainey Wilson’s tour will kick off the initiative on January 4, 2023 and will include 27 cities across the country, including Irving Plaza in New York City, The Showbox SoDo in Seattle, and The Signal in Tennessee, among others.

“This has been such a crazy year, from winning two CMA awards to making my acting debut in Yellowstone, I’m still processing it all,” says country music star, Lainey Wilson. “But 2023 is going to be even more special – I’m headlining my own tour for the first time with the support of Stella Rosa ® Wines. I love what they stand for and am so grateful for their support during this wild time in my career. It’s gonna be a helluva tour!”

Lainey Wilson’s tour, Country With A Flare, reflects Lainey’s depth and multifaceted character with elements of ’70s Rock, Funk, and Soul, but is country at its core. Lainey will be performing songs from her new album, Bell Bottom Country, including hit single, “Heart Like a Truck,” which is currently climbing radio charts, as well as her latest releases, “Live Off,” and “Watermelon Moonshine.” Across the album, Lainey reveals her dynamism and makeup as a woman who is vulnerable, empowering, and above all else, real.

“Just like Lainey’s story, Stella Rosa® Future Is Female is on a mission to support female voices with a unique story to tell,” says Andrea Cromaz, VP of Marketing for Stella Rosa® Wines. “Lainey’s immeasurable growth as an artist is a perfect example of harnessing the power of who you are, and we want to encourage all women in the music industry to tap into their authentic selves and flourish in the same way.”

For ticket sales and the full tour itinerary, visit LaineyWilson.com. For more information on Stella Rosa® Wines and what to purchase on the upcoming tour, visit your local grocery and liquor stores and check out StellaRosaWines.com for store locations near you.

Stella Rosa® is a selection of semi-sweet, semi-sparkling Italian wines, evolving with the spirit of the times when it comes to wine trends and popular culture. Among its impressive achievements are a 10x Impact Magazine Hot Brand award and its position as the #1 imported wine in America. Most recently, Stella Rosa® curated a collection of hand-crafted premium and fruit-flavored Brandy made from high quality grapes grown in Northern Italy. Stella Rosa® is created by Riboli Family Wines, a Los Angeles based establishment founded in 1917. For more information, visit www.stellarosawines.com.

CMA 2022 Female Vocalist of the Year, CMA 2022 New Artist of the Year, and ACM’s 2022 New Female Artist of the Year, Lainey Wilson has earned the enthusiasm of the industry. Having been named to nearly every “Artist to Watch” list, being crowned Billboard’s “Top New Country Artist of 2021,” and earning CMT’s 2022 “Breakout Artist of the Year” honor, the Louisiana native is one of Nashville’s hottest and most buzzed-about new artists. Landing her first No. 1 with her PLATINUM Certified ACM Song of the Year “Things A Man Oughta Know,” nearly 10 years to the day after leaving her small farming community in a camper trailer to chase her dreams, she has won over legions of fans with her signature Bell Bottom Country sound and aesthetic, which blends traditional Country with a modern yet retro flare. A prolific and sought-after songwriter (having co-writer credits on songs by artists including Luke Combs, Flatland Calvary and more), Lainey is a fresh, fierce voice in Nashville, delivering CMA nominated album of the year with her label debut, Sayin’ What I’m Thinkin’. With a rockstar stage presence, her artistry has taken her across the globe, performing for sold-out crowds throughout the US, UK, and Germany with notable names like Jon Pardi, Luke Combs, Morgan Wallen, HARDY, Jason Aldean, Ashley McBryde, and more. After topping the country radio charts for a second time with the two-week No. 1 hit, “Never Say Never” with Cole Swindell, her current single “Heart Like a Truck” and HARDY collaboration “wait in the truck” are Top 20 and climbing. Her new album, “Bell Bottom Country,” is out now and she can currently be seen starring in Season 5 of the hit series, “Yellowstone,” and was recently named “Tractor Supply Brand Ambassador,” adding to her growing list of endeavors.