Statement by Fred Ryan, Chairman of the Board of the Ronald Reagan Presidential Foundation and Institute on the Death of Bob Dole

SIMI VALLEY, Calif., Dec. 5, 2021 /PRNewswire/ — The Reagan Foundation mourns the loss of Senator Bob Dole, a remarkable American Patriot and Statesman who served our country with distinction in the famed 10th Mountain Division of the United States Army during World War II, as an attorney, a Member of Congress, a United States Senator, including eleven years as the Majority and Minority Leader of the Senate and the Republican Party’s Presidential nominee in 1996. 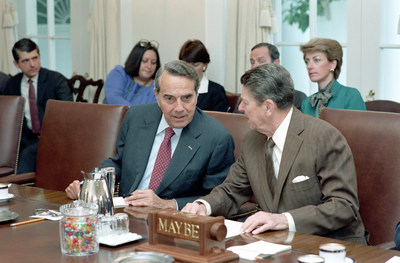 Upon presenting Senator Dole with the Presidential Citizens Medal on January 18, 1989, President Reagan said, “Whether on the battlefield or Capitol Hill, Senator Robert Dole has served America heroically. Senate Majority Leader during one of the most productive Congresses of recent times, he has also been a friend to veterans, farmers, and Americans from every walk of life. Bob Dole has stood for integrity, straight talk, and achievement throughout his years of distinguished public service.”

Although, when running against each other for the 1980 Republican Presidential nomination, Ronald Reagan and Senator Dole were political opponents, they grew to have a deep admiration and friendship.  Senator Dole’s passing is a huge loss for our great nation, and our thoughts and prayers go out to his loving and dedicated wife of 45 years, Secretary Elizabeth Dole and his daughter, Robin.